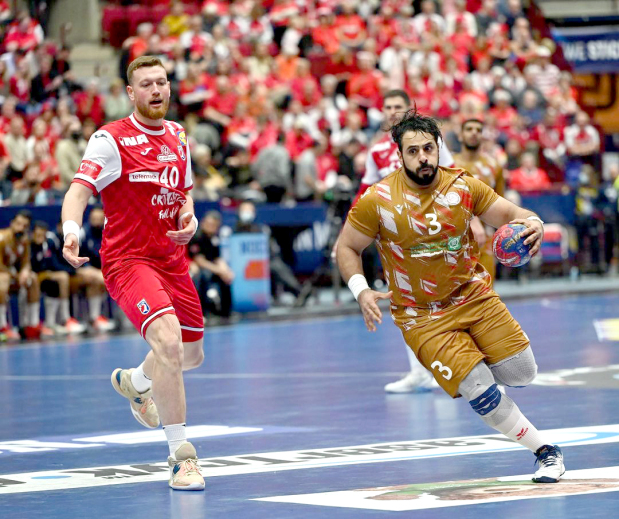 Action from the match between Bahrain and Croatia

Croatia overcame a strong challenge by Bahrain to win 43-32 last night in their last main round game of the 28th International Handball Federation (IHF) Men’s World Handball Championship at the Malmo Arena in Sweden.

Bahrain had earlier matched their opponents throw-for-throw in the first half which ended with Croatia leading by just one point at 17-16.

But the Croatians appeared to step on the accelerator about six minutes into the second half as they expanded a two-goal lead from 21-19 in the 36th minute to an eight-goal advantage by the 45th minute with the scoreboard reading 28-20 and 15 minutes left on the clock.

Ivan Martinovic and Filip Glavas, who both top-scored in the game with 11 goals each, then combined to score eight goals between them over the next 10 minutes to put Croatia 38-27 ahead with only five minutes remaining.

Even though Qasim Qambar – who top-scored for Bahrain with seven goals – and Ali Eid managed to score two goals each along with a single goal by Ali Merza in the time left, the Croatians also continued to hit the net of the Bahraini goal regularly and, when the final buzzer sounded, an 11-point difference separated the two teams.

“I think our players ran out of steam in the second half,” Bahrain head coach Aron Kristjansson told the GDN by phone from Malmo. “We had a fantastic first half, where we were neck-and-neck with the Croatians all the way until the half-time buzzer and, if we had managed to replicate that performance in the second half, the result could have been different.

“But I am very proud of our players. They should be proud of what they have achieved in this tournament. Getting into the main round, then winning our first-ever main round game against the USA was a big achievement. And we played very well in all our other games as well.”

Even though the loss meant that Bahrain finished fourth in the six-team group with four points, their excellent performances in the championship enabled them to finish in 16th place overall in the 32-team tournament – their best ever showing in six appearances since they made their debut in 2011.