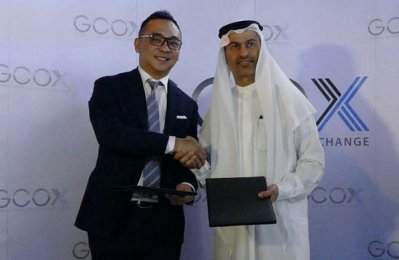 The memorandum of understanding (MoU) was signed during the Future Blockchain Summit in Dubai, UAE.

“With the global crypto market predicted to be worth over $6 billion by 2025, and the rate of adoption expected to grow exponentially in the coming year, the importance of capitalising on the enormous potential for growth and blockchain development cannot be understated,” said Sir Dr Jeffrey Lin, chief executive officer of GCOX.

“The UAE government, which announced last month that over half of all federal transactions are expected to be powered by blockchain technology by 2021, is at the forefront of this trend, making this partnership with Sheikh Khaled Bin Zayed Al Nahyana significant milestone for us and the industry as a whole.”

Sheikh Khaled Bin Zayed Al Nahyan, chairman of Bin Zayed International said: “Through this strategic partnership with GCOX, I am committed to push the frontiers of financial services further, accelerate the mainstream adoption of blockchain and aim to create UAE’s first fully-licensed token exchange in Dubai.”

As the world's first celebrity crypto tokens exchange, GCOX enables celebrities to create, list and trade their personal crypto tokens on its very own blockchain called Acclaim. The organisation aims to bridge the gap between an entertainment industry valued at $2.2 trillion and the burgeoning blockchain crypto market, leveraging the technology to revolutionise and redefine popularity.

GCOX has already amassed a stellar cast of private placement investors, including the Philippines’ international boxing superstar and senator Manny Pacquiao, former England football superstar Michael Owen, who is also a member of the GCOX advisory board, Lim How Teck, the chairman of Heliconia Capital, the investment arm of Singapore’s Temasek Holdings, as well as billionaire and 1999 Singapore Businessman of the Year, Tommie Goh.

According to Sir Dr Lin, blockchain marks the beginning of the new Internet of Value, which will enable anyone to exchange anything of value with others – from frequent flyer points to intellectual property.

“Until recently, transactions such as these have always required a third-party intermediary such as a bank or service. However, blockchain technology has enabled transactions to be carried out peer-to-peer in a transparent manner which makes it highly secure, extremely efficient, and significantly reduces costs,” said Sir Dr Lin.

For GCOX, this means that fans and celebrities in the UAE and across the globe will be able to interact with their favourite celebrities and stars without the need for any third-party intermediary, making interaction more personal. This in turn will incentivise fans to continue further engagement with the celebrities.

“As the widespread adoption of blockchain technology increases, the Internet of Value will expand rapidly. Establishing the region’s first ever celebrity tokens crypto exchange in the UAE will generate immense value that will benefit celebrities and their fans alike, and bring vast increases in security and transaction speed,” said Sheikh Khaled. – TradeArabia News Service