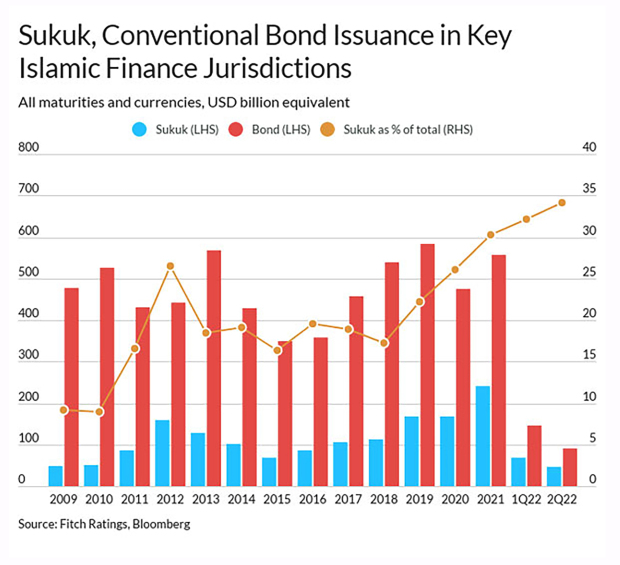 Fitch Ratings says that however, it is uncertain if additional changes will be seen in the near term and issuers have exhibited varying degrees of adaptation, while the practical effect of the new documentation has yet to be tested.

A majority of Fitch-rated sukuk issued in 2021-9M22 have new clauses embedded in the documents, including defined tangibility events and the associated put options.

The changes have been seen across sovereigns, financial institutions and corporate issuers. Non-compliance with AAOIFI Sharia standards and Higher Sharia Authority (HSA) guidelines could reduce sukuk demand, as a sizeable share of global sukuk investors, arrangers and issuers are based in the UAE and fall under UAE Central Bank’s remit. In June 2022, Fitch updated its Sukuk Rating Criteria to take account of these developments.

Fitch commented on the potential impact of the adoption of AAOIFI standards when new clauses and revised terms began to appear in documentation last year. These included stricter tangibility ratio requirements with new dissolution triggers. While gaps remain, some standardisation has been achieved in language relating to tangibility events, delisting events, indemnity payments and partial-loss events.

Several Fitch-rated sukuk across sectors issued in 2021-9M22 have sufficient unencumbered Sharia-compliant assets to provide headroom against tangibility events. However, the risk of tangibility event is present for sukuk issuers (mainly non-sovereigns) with limited tangible assets and low headroom. This could expose issuers to rising liquidity risk upon exercise of put options by investors, which could have implications for their Issuer Default Ratings.

The amount that can be raised through sukuk issuance could also be capped by the value of an obligor’s tangible assets. This built-in cap on leverage could be credit positive, but may be neutral or negative for issuers with limited tangible assets, asset-light firms and highly indebted issuers, for whom it could restrict access to funding.

Sukuk investors may have an advantage over conventional bond investors in their contractual right to exercise a put option following a tangibility event and accelerate repayment prior to maturity.

However, this remains untested in practice since no dissolution triggers have been hit, or puts exercised. This compounds uncertainty over potential differences in sukuk and bondholder treatment in many Islamic finance markets. Most Fitch-rated sukuk are senior unsecured obligations of the issuer and rank pari passu with other senior unsecured obligations, including bonds.

Global sukuk issuance slowed in Q121, due to complexities relating to AAOIFI, before normalising. Annual global growth in 2021 was 42.3 per cent, driven by sizeable issuances by sovereigns, Islamic banks and large corporates.

However, the impact was greater in the UAE, where sukuk volumes fell by 54.1pc in 2021, while issuance of conventional bonds, which are simpler, more standardised and unaffected by AAOIFI standards, jumped by 239.3pc.

This shift from sukuk to bonds partly retraced in H122, when sukuk issued by UAE-based entities rose by 88.4pc compared to 2H21, while bond issuance increased by 9.2pc.

Issuance for the remainder of 2022 will depend on various factors, including how far high oil prices reduce oil-exporting sovereigns’ funding needs and global investor appetite for emerging market debt as well as Sharia complexities.

A lack of standardisation is a long-standing challenge for sukuk, including in product structuring, documentation, Sharia-interpretation and dispute resolution.