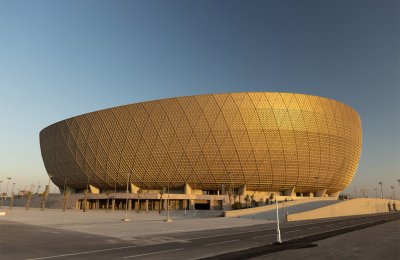 Qatar’s intricately designed Lusail Stadium, one of the stadiums set to  host Fifa World Cup, has officially opened its doors to stage the Lusail Super Cup 2022.

The stadium is one of the largest in the region and will host the Fifa World Cup Qatar 2022 Final this December. At the start of the match, fans were treated to a spectacular set from inimitable Egyptian music artist Amr Diab.

The stadium is set in the smart city of Lusail, which is deemed Qatar’s largest sustainable real estate development, spanning 38km and four islands. It boasts twenty-two internationally ranked hotels and nineteen multi-purpose districts, which are designed for everything from living to working to entertaining.

Visitors can contribute to zero carbon travel to and around the city with Lusail’s new tram network, and 76km of planned cycle and pedestrian tracks. What’s more, it is easily accessible by the Doha Metro (the Red line).

Maryam Al Maslmani, Public Relations & Communication Department at Qatar Tourism, said: “Lusail city is a treat for visitors, with the striking architecture that marks its horizons and the open spaces that offer a retreat from the city. We are thrilled that our visitors from the region can get a sneak peek at what Qatar has to offer and gear up for even more adventure and beautiful sightings later this year.”

Nearby attractions to Lusail Stadium include the recently opened Place Vendôme which infuses classic Parisienne architecture and is home to numerous dining and shopping boutiques. For those who want to enjoy the great outdoors, the Marina Promenade offers a chance to stroll, jog or cycle while taking in distinct landmarks such as the Raffles and Fairmont Doha, designed as traditional scimitar swords that pay homage to Qatari culture and the national seal.

Also in the area, and currently in development, is the Lusail Boulevard which seamlessly blends a contemporary urban lifestyle with Qatar’s rich, cultural fabric. Spanning 1.3km, Lusail Boulevard will present a mixed-use offering of upscale offices, residential units and retail spaces.

Families traveling to Qatar can head to the green landscapes of Crescent Park or Doha Festival City to jump on one of the many thrilling rides at Angry Birds World (true daredevils can hurtle into the air on the theme park’s 60m slingshot). Set to open later this year and in time for the Fifa World Cup Qatar 2022 is the Al Maha Island which will see a mega arena for concerts, Nammos beach club and Lusail Winter Wonderland.  – TradeArabia News Service