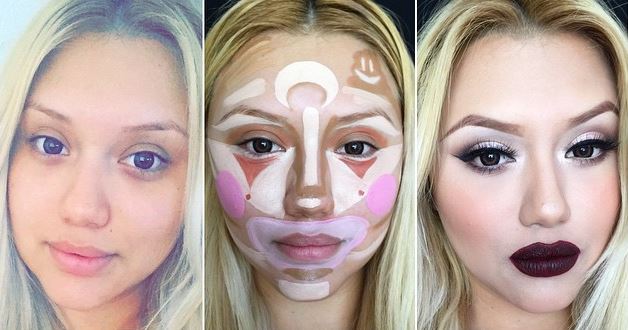 An example of extreme contouring in which one can completely change the way they look. ( Image courtesy: instagram.com/belladelune)

Algiers: Make-up can do wonders, and while it can make you look very different on special occasion, when the make-up comes off it can lead to many problems. However, this may be the first time a newlywed bride is facing such a severe backlash.

An Algerian groom accused his wife of fraud, as he says that she did not look as pretty on the morning after the wedding as she did on the day they got married. He claims that he could not recognise her after she washed the make-up off her face after the wedding. In fact, according to media reports, the groom actually mistook her for a thief.

He told the court that he feels cheated as his wife covered her face with too much make up before marriage, and hiding the fact that she is not pretty.

“He said he was deceived by her as she used too much make-up to change the way she actually looked before their wedding,” the reports quoted a court source.

“He said she looked very beautiful and attractive before marriage, but when he woke up in the morning and found that she had washed the make-up off her face.” He added that he was frightened as he thought she was a thief.

"The groom told court that he is demanding $20,000 damages for his psychological suffering.”

While you can’t blame a girl for wanting to look her prettiest on her wedding day but this may have been taking it too far. In any case, her make-up artist definitely deserves a round of applause.

Extreme contouring is in vogue these days where women can use make up to completely change the way they look. Several celebrities including Kim Kardashian have posted videos on popular social media networks to demonstrate how this works. Here is a popular blogger ‘BellaDeLune’ showing you how this art works.

Its that simple 😎😎💁🏻💁🏼 Extreme Color Correct, Highlight & Contour with @makeupby_alo wait what extreme!?! . Check out more deets on this look on my 👻snap chat: belladelune . To share a few: 💀🌹💀 LASHES: by @beautyconvict in AMMO LIPS: @lagirlcosmetics liquid lipstick in backstage . #facedrafting #blendingcommittee 😂