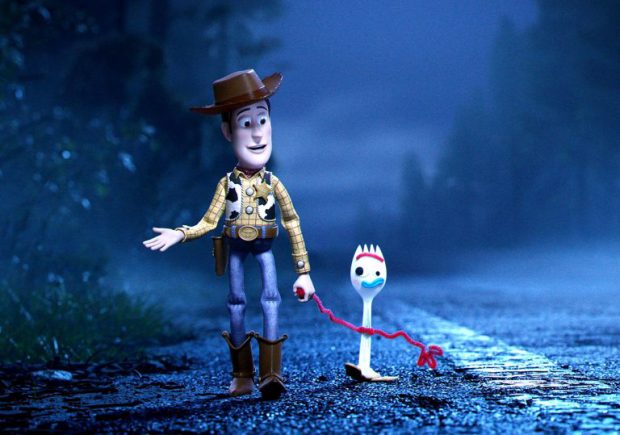 A scene from the animated feature Toy Story 4

IT is almost a quarter of a decade since Woody and Buzz Lightyear stole our hearts in the first instalment of Pixar’s classic Toy Story.

At the time it was nothing short of revolutionary, becoming the first feature-length film to be entirely computer-animated when it was released in 1995.

Fast-forward to 2019 and the Disney franchise is once again capturing the imaginations of both adults and children alike with the release of its fourth instalment.

It’s been nine years since the last movie, but trust me – this latest one was worth the wait.

Woody (Tom Hanks), Buzz (Tim Allen) and the rest of the gang are back and they are on top form, picking up where Toy Story 3 ended.

Having been handed down from their beloved owner Andy to his sister Bonnie, all is going well until they are introduced to Forky (Tony Hale) – a handmade toy crafted from discarded rubbish.

It is Forky’s existential dilemma, as well as his hilarious scene-stealing moments, that catapult the crew on a new adventure that is guaranteed to have you glued to your seat.

All bring something new to the table, but fans can rest assured that the latest movie has all the ingredients that made its forerunners so successful.

Each character is superbly brought to life and the rollercoaster journey on which they embark makes this magical piece of art difficult to resist, particularly given its heart-warming message about existence and belonging.

The third film in the series won an Oscar for best animated feature and was also nominated for best movie.

Don’t be surprised if Toy Story 4 follows in its footsteps.

And a tip for die-hard fans who don’t want to miss a beat, be sure to stick around until after the end credits for six additional scenes.