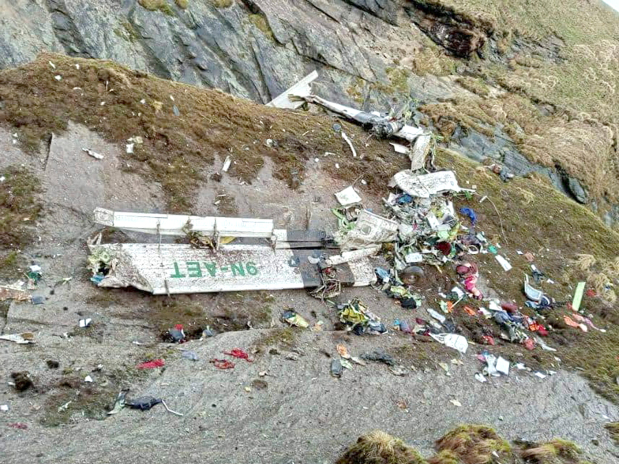 KATHMANDU: Nepal authorities yesterday recovered or located the bodies of all but one of 22 people who were on board a plane that crashed into a Himalayan mountainside on Sunday, officials said, and the government has formed a panel to investigate the incident.

Two Germans, four Indians and 16 Nepalis were on the De Havilland Canada DHC-6-300 Twin Otter aircraft which crashed 15 minutes after taking off from the tourist town of Pokhara, 125km west of Kathmandu, on Sunday morning.

“There is very little chance to find survivors,” said Deo Chandra Lal Karna, a spokesman for the Civil Aviation Authority of Nepal.

Nepali soldiers and rescue workers had retrieved 20 bodies from the wreckage, strewn across a steep slope at an altitude of around 14,500 feet. They were trying to recover another body they had seen, officials said.

The government said it had set up a five-member panel to determine the cause of the crash and suggest prevention measures for the future.

The difficult terrain and poor weather have hampered the search parties. An image published in Nepali media showed uniformed rescue workers moving a body from the wreckage and using ropes to haul it onto a stretcher and up a steep, grassy ridge.

“There is very thick cloud in the area,” Netra Prasad Sharma, the most senior bureaucrat in the Mustang district, where the crash took place, said.

In Kathmandu, the capital, relatives of victims waited for the bodies to be brought back from the crash site.

“I am waiting for my son’s body,” Maniram Pokhrel said, his voice choking. His son Utsav Pokhrel, 25, was the co-pilot.

Operated by privately owned Tara Air, the aircraft crashed in cloudy weather and the wreckage wasn’t spotted until yesterday morning by Nepal’s army.

The plane was headed to Jomsom, a popular tourist and pilgrimage site that lies about 80km northwest of Pokhara – usually a 20-minute flight.

But the aircraft lost contact with the Pokhara control tower five minutes before it was due to land, airline officials said.

The crash site is close to Nepal’s border with China, in a region where Mount Dhaulagiri, the world’s seventh-highest peak at 8,167 metres, is located.

Air accidents are not uncommon in Nepal, home to eight of the world’s 14 highest mountains, including Everest, as the weather can change suddenly and make for hazardous conditions.

In early 2018, a US-Bangla Airlines flight from Dhaka to Kathmandu crashed on landing and caught fire, killing 51 of the 71 people on board.