Las Vegas: A 26-year-old actress and model from the Philippines was crowned Miss Universe on Sunday after host Steve Harvey mistakenly first announced that Miss Colombia had won the 64th edition of the pageant broadcast live on the Fox television network. 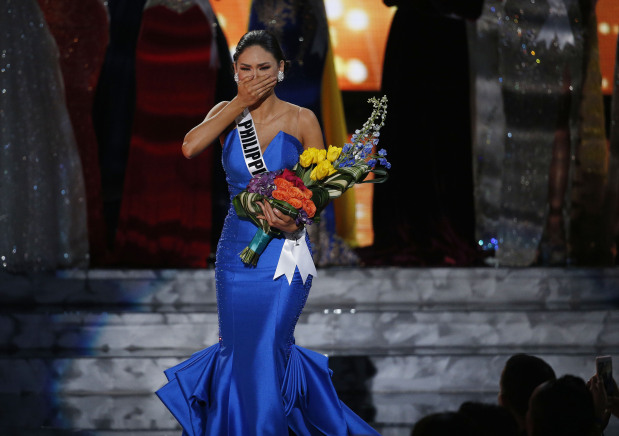 Miss Philippines Pia Alonzo Wurtzbach reacts as she was announced as the new Miss Universe at the Miss Universe pageant on Sunday, Dec. 20, 2015, in Las Vegas. (AP Photo)

The pageant ended with a gaffe, after its first edition since the annual beauty show was thrust into controversy when then co-owner and U.S. presidential candidate, Donald Trump, made disparaging remarks about immigrants.

Pia Alonzo Wurtzbach, a Filipino-German actress and model born in Stuttgart and raised in Cagayan de Oro, was announced as runner-up to Miss Colombia, before Harvey announced to the audience that he had made a mistake.

Ariadna Gutierrez Arévalo, 21, of Sincelejo, Colombia, had already been crowned by Miss Universe of 2014, Paulina Vega of Barranquilla, Colombia, who was forced to remove the crown and give it to Miss Philippines. Olivia Jordan, 27, of Tulsa, Oklahoma, finished third.

"I'd like to apologize wholeheartedly to Miss Colombia and Miss Philippines for my huge mistake," Harvey said on Twitter. "I feel terrible." 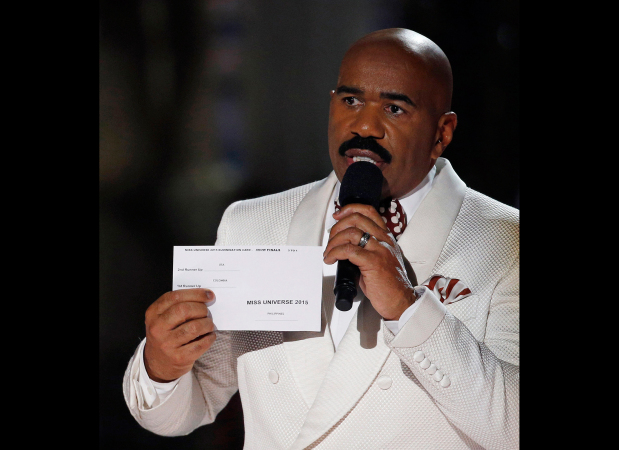 When asked why she wanted to be Miss Universe, Wurtzbach replied that, "I will use my voice to influence the youth and I would raise awareness to certain causes like HIV awareness, that is timely and relevant to my country."

It was the first Miss Universe title for a contestant from the Philippines in more than 40 years.

Among the more notable moments, Flora Coquerel of France, who was at the Paris stadium the night of the November attacks by militant Islamists, reached the final five and Ariana Miyamoto of Japan, whose father is African-American, reached the top 10 contestants.

Miyamoto's height of 1.73 m (5.7 ft) and bronze skin are unusual in Japan and her selection to represent Japan in the pageant created an online firestorm in her native country.

The pageant was held at the Planet Hollywood Resort & Casino in Las Vegas, Nevada.

For the first time, viewers had a chance to vote on the winner, rating contestants in the swimwear, evening gown and interview competitions.

Until recently, the pageant was co-owned by Comcast Corp's NBC Universal and Trump, who is leading national polls in the 2016 Republican presidential nomination race.

Earlier, Trump's remarks about Mexicans in announcing his presidential candidacy in June drew sharp criticism, and the Spanish-language network Univision pulled out of a deal to televise the pageant.

Trump, who has sued Univision for $500 million, bought out NBC's stake in the Miss Universe Organization, which produces both Sunday's pageant and the Miss USA contest. He sold the company in September.