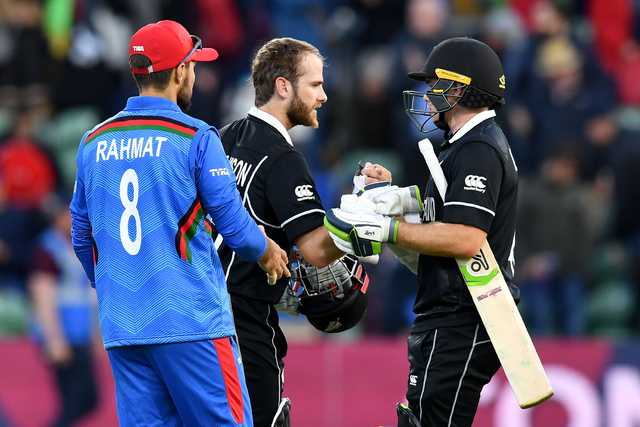 TAUNTON, UK: Kane Williamson led by example as the New Zealand captain’s 79 not out guided his side to a seven-wicket win over Afghanistan that maintained their 100 percent start to the World Cup yesterday.

New Zealand’s third successive victory kept them on course to make the semi-finals in the 10-team tournament, while minnows Afghanistan have lost all three of their matches.

New Zealand, who saw off Sri Lanka and Bangladesh in their opening two games, have won 11 of their last 12 World Cup games, with their only defeat in that span coming against Australia in the 2015 final.

The Black Caps’ run chase got off to the worst possible start when Aftab Alam had Martin Guptill caught off a thin inside edge with the first ball of the innings.

Guptill’s 14th ODI duck was a dream start for Aftab in the pace bowler’s first appearance in this year’s World Cup.

Afghanistan took the field without leg-spinner Rashid Khan, who was hit on the head when he was dismissed by Lockie Ferguson’s bouncer in the first innings.

He looked dazed as he walked off the field and later failed his first concussion test, ruling him out for the rest of the match and depriving Afghanistan of their best bowler. But it was Aftab who was leading the Afghan attack to good effect and he removed Colin Munro to leave New Zealand on 41-2.