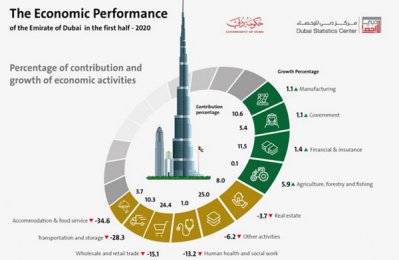 Dubai’s economic growth is expected to accelerate to 4% in 2021 taking into account prevailing conditions and the outlook for the global economy, said Sami Al Qamzi, Director General of Dubai Economy.

Al-Qamzi added that the continued flow of local and foreign investments, whether from the government or private sector, are supporting the Emirate’s efforts in achieving sustainable growth and a rapid transition to a knowledge-based economy, reported state-run news agency Wam.

The economic impact of confinement measures in the first half of 2020 Preliminary reports issued by the Dubai Statistics Centre show a 10.8% decline in the emirate’s economy in the first six months of 2020,the report added.

During the period between March and October this year, the Government of Dubai launched four stimulus packages with the objective of mitigating the impact of confinement measures in the Emirate, on the demand side, covering consumption, investment, trade and travel, as well as on the supply side including the workforce, supply chains and the cost of doing business.

The initiatives, worth around AED6.8 billion ($1.85 billion), helped offset the shock and repercussions in the form of job losses or disruptions to businesses.

According to a recent study by Dubai Economy, Dubai’s stimulus packages contributed to reducing the economic impact of the crisis by limiting the expected economic contraction to -6.2% in 2020, a decline that is in line with the growth outlook of countries around the globe as reported by the International Monetary Fund.

The precautionary and preventive measures adopted to contain the Covid-19 pandemic in Dubai, along with travel restrictions around the world, had a severe impact on hotels and restaurants, which are expected to see a contraction of -20% in 2020. Also affected were the transport and storage sector (-11 %), and the retail and wholesale trade sector (-9%).

The Government of Dubai and its Future Foresight project have laid strong foundations for a rapid recovery. The support measures launched during the pandemic were designed to contribute substantially to the ongoing economic recovery efforts.

Al-Qamzi explained: "These efforts include investment in healthcare and food security that will not only reduce the likelihood of future shocks, but also contribute to enhancing the Emirate's resilience against such shocks."

The Dubai Statistics Centre data also show that activities related to cross border transactions were the most impacted by the overall decline in H1 2020. These activities accounted for 85.4% of the total decline and included sectors such as trade, transport, hospitality and food, which were severely hit by the closure of international borders and curbs on travel and tourism. Foreign trade also suffered as cargo movement was restricted by closure of borders and airports.

Trade, transport and storage in general saw a decline in H1 2020 compared to the same period with trade activity alone decreasing by 15.1%. Despite the decline, trade remained the largest contributor to the emirate’s economy, with a 24% share. The decline largely coincided with the gradual closure that began in mid-March and continued until June.

Transport and storage activity decreased by 28.3%, pulling the emirate's economy down by 3.6 percentage points, as flights and airports came to a standstill and broad demand for transport weakened during the National Disinfection Program and related closure. However, despite the decline, transport and storage activity made a substantially high contribution of 10.3% to the emirate’s economy.

The Dubai Statistics Centre data also show a decrease of 34.6% in activity in the hospitality and food services (hotels and restaurants) during H1 2020 compared to the same period in 2019. Though the decline pulled the Dubai economy down by 1.7 percentage points, the sector contributed 3.7% to it.

Certain health-related activities witnessed a decline of 13.2% in the first half of 2020, which can be attributed to changing healthcare priorities and suspension of specialized activities and services to focus on crisis management and counter-pandemic measures.

Real estate activities also witnessed a decline of 3.7%. The sector contributed 8% to real GDP and an added value of approximately AED15 billion in H1 2020. The drop in residential rental prices and margins achieved from the sale of real estate units were the major reasons for the decline.

Financial services and insurance activities saw a new phase of growth during the pandemic, growing 1.4% and pushing the emirate’s overall economy positively by 0.1 percentage points. The sector also enhanced its contribution to the emirate’s economy to 11.5% in the first half of 2020.