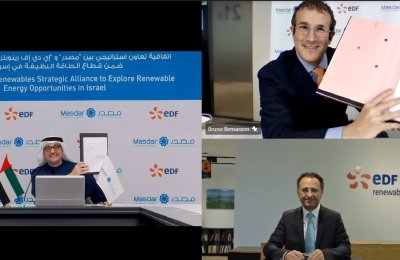 Abu Dhabi's renewable energy company Masdar said it has signed a strategic agreement with French group EDF Renewables to explore renewable energy opportunities in Israel and support the country’s clean-energy objectives.
Under the agreement, Masdar and EDF Renewables Israel, a wholly owned subsidiary established in 2010, will look to collaborate on existing renewable energy projects, and projects under development, while also exploring joint participation in new programmes announced by the government of Israel.
The MoU was signed by Mohamed Jameel Al Ramahi, Chief Executive Officer of Masdar and Bruno Bensasson, EDF Group Senior Executive VP Renewable Energies and Chairman and CEO of EDF Renewables at a virtual ceremony held on the side lines of Abu Dhabi Sustainability Week (ADSW) 2021.
Israel is targeting 30 percent of its energy coming from renewable sources by 2030, up from a previous target of 17 percent, as it looks to phase out coal use.
Achieving the new target will require an additional 15 gigawatts (GW) of solar capacity being developed over the period.
On the agreement, Dr Yuval Steinitz, Israel's Minister of Energy, said: "We are seeing the first fruits of the Abraham Accords in the field of energy! We welcome all investment that brings us closer to achieving the targets that I set for solar energy in Israel."
"The new partnership between Masdar from the United Arab Emirates and EDF - an international company that invests in renewable energy around the world and operates in Israel for a decade - is an expression of confidence in Israel's energy market and will help us achieve our goal of becoming a world leader in solar energy within six to seven years," stated the minister.
"The UAE and Israel have embarked on a new era of co-operation on renewable energy and associated technologies, which will benefit both our nations and support our clean-energy objectives. Israel is known for its innovation ecosystem and we look forward to working in partnership with EDF Renewables Israel on developing solutions that will drive the energy transition," said Al Ramahi.
"This also strengthens our already powerful partnership with EDF Renewables, with whom we are already working together on projects across the Middle East and North Africa, and in North America," he added.
Bensasson pointed out that Israel was a country with an attractive long-term potential for renewable energies and innovative technologies, where EDF Renewables has developed a leading position, especially in solar energy.
"I am very happy to extend to new geographies, our trusted partnership with Masdar and to sign this strategic alliance today in Israel," he stated.
"By joining our forces with Masdar on the Israeli market, we will strengthen the leading position that the teams of EDF Renewables Israel have achieved over the last decade," he added.-TradeArabia News Service