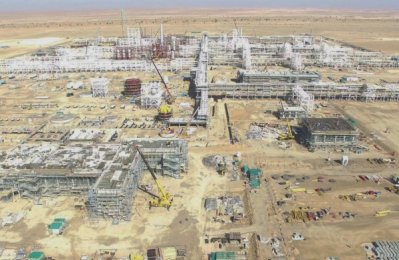 The Yibal Khuff project
A key milestone has been reached in the delivery of the Yibal Khuff project, among the big-ticket integrated Oil & Gas developments of Petroleum Development Oman (PDO), the project’s principal contractor announced.
UK-based Petrofac said hydrocarbons began flowing into the estimated $1 billion mega project’s Central Processing Facilities, an Oman Observer report said. It is the latest in a series of steps that form part of the giant’s scheme commissioning activities.
“We appreciate the extraordinary team efforts during this prolonged pandemic period. We continue towards achieving the next commissioning milestones safely and for a successful plant operation,” said Khalid Abdul Kadar, Petrofac’s Project Director, in a statement.
Petrofac, one of the biggest hydrocarbon, refining and petrochemical contractors in the sultanate, was selected by majority state-owned PDO in 2015 to oversee the development of the giant Yibal Khuff project as part of an engineering, procurement and construction management contract.
Petrofac said at the time that the contract value was around $900 million.
The project, billed as one of the most technically complex ventures implemented by PDO, processes a mix of hydrocarbons from a cluster of sour Oil & Gas reservoirs.
Adding to its complexity are the ultra-high concentrations of sulphur, as well as other contaminants, that must be filtered out to meet the stringent specs set by PDO for the processed streams of oil and gas emerging from the complex.
Around 235 tonnes of solid elemental sulphur will be produced daily as a result of sulphur recovery operations.
When fully operational, Yibal Khuff will deliver 6.1 million standard cubic metres per day (mmscmd) of associated gas, alongside 21,900 barrels per day of oil.
The natural gas output will be used primarily for power generation, as well as Enhanced Oil Recovery (EOR) operations. -- TradeArabia News Service