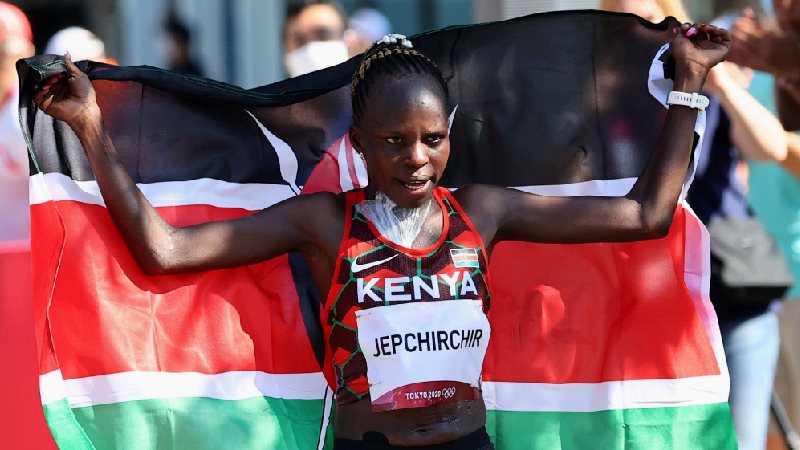 Jepchirchir is the first athlete to pick up Olympic gold and win the famed five-borough race in the same year as she crossed the finishing line in two hours, 22 minutes and 39 seconds, with compatriot Viola Cheptoo and Ethiopian Ababel Yeshaneh finishing second and third respectively.

"After I won Olympic marathon I was not expecting to win," said Jepchirchir, who had just 13 weeks in between the Games and New York. "I tried my best to make sure I complete my workouts, my preparations... I'm so happy today."

American Molly Seidel, who took home the bronze from the Tokyo Games, finished fourth and disclosed after the race that she broke two of her ribs a month ago and had considered withdrawing.

"Probably two weeks ago it was extremely painful and it was hindering my ability to do anything," said Seidel.

Korir, who finished second in 2019, was trailing 52 seconds behind the leaders at the halfway point but had established a 17-second lead through the 35-kilometre mark.

He leapt into the air as he broke the tape in 2:08:22 in Central Park, with Moroccan Mohamed El Aaraby finishing 44 seconds behind and Italian Eyob Faniel finishing third.

"In 2021 we had some training, some races were cancelled, but we keep on training," said Korir, who did not compete last year. "When I had a chance to race in New York… I put more effort."

The temperature hovered around 40 degrees Fahrenheit (4.44°C) on Staten Island at the start of the marathon at 8 a.m. ET, after going on hiatus for a year due to the Covid-19 pandemic.

Swiss Marcel Hug won the men's wheelchair division for the fourth time in 1:31:24 and Paralympic champion Madison de Rozario was the first Australian to win the women's wheelchair race, finishing in 1:51:01.

Sunday's race went off 13 weeks after the Tokyo Games and capped a chaotic year for the marathon majors after London and Boston were moved from their traditional April dates to October due to the pandemic. read more

Hug, who picked up his second successive Paralympic marathon gold in Tokyo, has enjoyed a blockbuster 2021, also winning the Boston Marathon and Berlin Marathon.

"It's definitely a crazy season," said Hug. "The toughest season I've had so far."