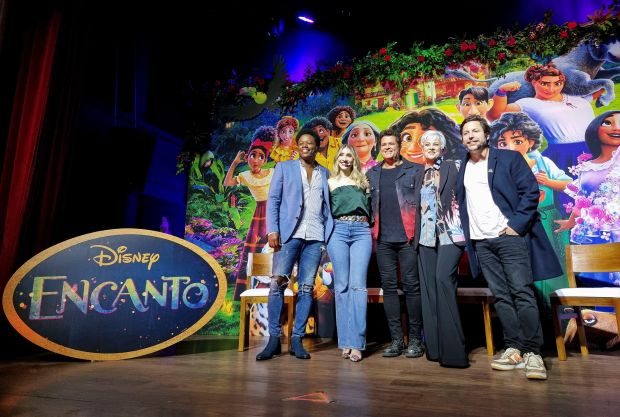 Colombian singer Carlos Vives poses for a photo accompanied by the actors who voiced the characters in the movie "Encanto", in Bogota, Colombia November 10, 2021. Reuters Photo

Movie buffs in the United States are back in theatres as the pandemic eases, but it is not clear if a sizeable chunk of the audience - families - might be just as happy watching from the comfort and safety of their homes.

The offer of new movies at home in the safety of living rooms may trump any clamour for the big screens, an issue Walt Disney Co is addressing by shortening the time between blockbusters' release in theatres and on Disney+ streaming.

"It's about ping-ponging the audience from the theatre and back to their TV and vice-versa. Disney obviously has an incredibly bright future. But it's gotten more complicated because the pandemic has forever changed consumer viewing habits," Comscore's media analyst Paul Dergarabedian said theatre owners underscore that movie slates are strong and cinemas are filling up.

"Watching movies at home was nothing new, but generally speaking people want to get back... that's being proved every week at the box office when new movies are opening that are really strong," said Phil Contrino, director of Media and Research at the National Association of Theatre Owners.

But Disney Chief Executive Bob Chapek was less certain when talking to analysts this week.

"We're still unsure in terms of how the marketplace is going to react when family films come back" with theatrical debuts, he said. Disney has shortened the time between opening on the big screen and at home.

"We're doing that so that we can get our films quicker to Disney+," he said, "but at the same time to see if the theatrical market can sort of kick back into full gear as we prime the pump with these films."

During the pandemic, Disney experimented with simultaneously releasing some big-budget movies such as "Cruella," "Black Widow" and "Jungle Cruise" on Disney+ for an extra fee and at the cinemas.

"While Covid will be in the rearview mirror, God willing, I think changing consumer behaviour is something that's going to be more permanent," Chapek said.

Comscore data shows that new box office launches in October grossed nearly 10 times more than at the start of the year, thanks to Disney's hits such as "Shang-Chi," "Black Widow," "Jungle Cruise" among others.

The data also showed "Ron's Gone Wrong," an animated family film that hit theatres in late October, had about half of its audience in the 13-17 years age group in the first week. The latest James Bond movie "No Time to Die," had 72 % in the 25 plus age group after its release in early October.

Disney will have to strike a balance to keep theatre operators happy while also producing new content to feed streaming subscribers, analysts said.

"Studios like Disney are still having to figure out that balance between the two," said Edward Jones analyst David Heger.