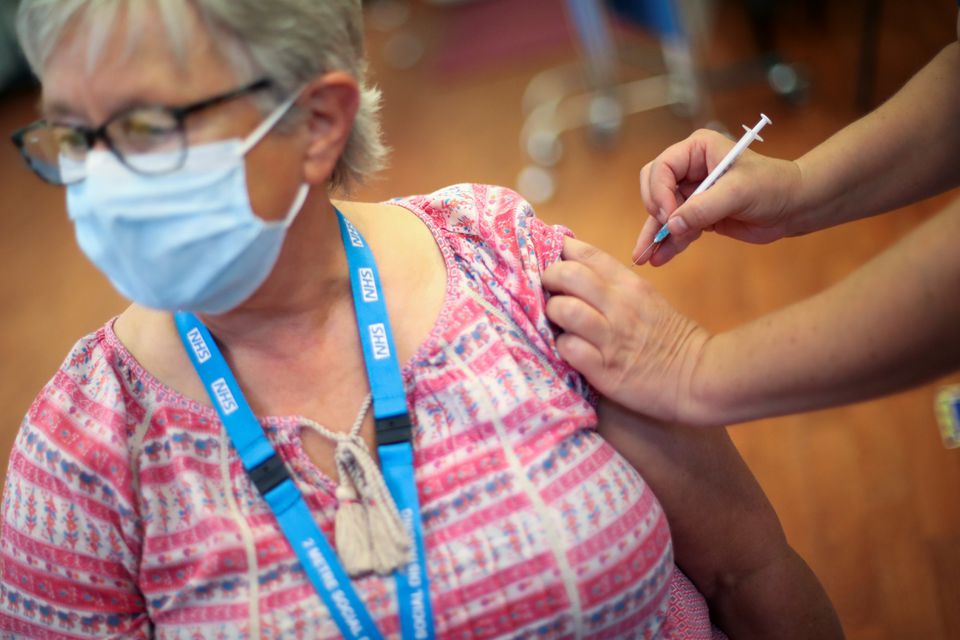 A woman looks on as she receives the Covid-19 booster. (Reuters Photo)

Covid-19 vaccines made by Pfizer (PFE.N) and Moderna (MRNA.O) that use mRNA technology provide the biggest boost to antibody levels when given 10-12 weeks after the second dose, a new British study has found.

The "COV-Boost" study was cited by British officials when they announced that Pfizer and Moderna were preferred for use in the country's booster campaign, but the data has only been made publicly available now.

The study found that six of the seven boosters examined enhanced immunity after initial vaccination with Pfizer-BioNTech's vaccine, while all seven increased immunity when given after two doses of AstraZeneca's (AZN.L) vaccine.

"A third dose will be effective for many of the vaccines we've tested and in many different combinations," Professor Saul Faust, an immunologist at the University of Southampton and the trial's lead, told reporters.

The study, published late on Thursday, found that a full dose or half dose of Pfizer or a full dose of Moderna gave a strong boost to both antibody and T-cell levels, regardless of whether the person initially received Pfizer or AstraZeneca.

"All four of the vaccination regimes most widely deployed in the UK lead to essentially the same levels of immunity and are likely to be equally effective," said Professor Eleanor Riley, immunologist at the University of Edinburgh. She added that a policy change in booster gaps was also supported by the data.

"These data support the JCVI (vaccine committee) decision earlier this week to bring forward booster doses to 3 months after the second vaccination."

When AstraZeneca, Novavax, Johnson & Johnson and Curevac were given as boosters, they increased antibody levels for either initial vaccine, albeit to a smaller degree, the study found. However, while Valneva boosted antibodies in people initially vaccinated with AstraZeneca, it did not provide a boost for Pfizer.

The COV-Boost study pre-dated the spread of the emergent Omicron variant of concern, and Faust said he had shared samples with the UK Health Security Agency to generate data on Omicron.

The study did however find that booster shots also helped to generate a broad T-cell response against the Beta and Delta variants, which may play a key role in longer-term protection.

A separate study by Imperial College London into how initial exposure to SARS-CoV-2 shapes immune responses, also published late on Thursday, similarly found a good T-cell response to both Alpha and Delta after infection followed by vaccination.