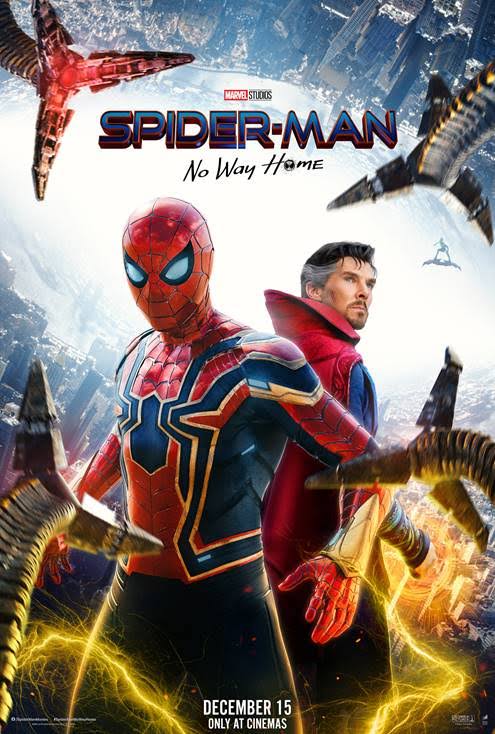 ‘With great power comes great responsibility’ is a phrase that is synonymous with the Spider Man franchise.

Marvel and Sony executives definitely felt a ‘great responsibility’ as the enthralling ending of the last movie (wherein Spiderman’s real identity gets exposed to the world) left many fans yearning for the final installment in the trilogy.

The film has been pegged by many as the ‘cinematic event of the year’ and, even though we only have two weeks until 2022, it will be hard to imagine any movie that has beaten, or is going to exceed, the pure excitement that this has exuded.

The hype has been unparalleled. The big question: Would ‘No Way Home’ exceed its high expectations or be labelled a Grade A dud?

‘No Way Home’ is simply Marvel at its very best.

The leading man Tom Holland was perfectly cast as he encapsulates the very essence of the beloved masked hero.

Holland comes off as awkward and relatable while still looking like a credible threat to his foes. His chemistry with on-screen love interest MJ (played by Zendaya) is a high point of this film. Zendaya’s brooding and jaded portrayal of MJ juxtaposes the light-hearted Peter Parker.

The film brilliantly blends fan service and nostalgia with the lore. The trailer showed the returns of the villains from past Spider Man films such as ‘Doctor Octopus’ and the ‘Green Goblin’. While this raised a few eyebrows with dedicated followers, Watts seamlessly incorporated their returns in the best way possible.

Willem Dafoe’s hauntingly, beautiful portrayal of the Green Goblin stole the show in my opinion and showed that the veteran Hollywood star still has some tricks up his sleeve, while Jacob Batalon (Spidey’s best friend Ned) offers well placed comedic relief.

Get a seatbelt (and some hankies) with your popcorn as there is not one dull moment in this two-and-a-half hour long epic. Watts takes you on an emotional rollercoaster throughout and I’ve never witnessed Bahrainis scream and laugh as much as I did during this screening.

This film will leave you feeling satisfied. However, it comes with a sobering surreal realisation that this movie is a culmination of almost 20 years of work. Many in the audience grew up with these characters, as they've evolved, aged and changed (for better or worse) as have us all - a mirror to how much we ourselves have changed.

This world is so much more complicated and scary then it was in 2003, and sometimes it’s comforting knowing that while change can be a good thing, you can still embrace your inner child at least as long as the movie runs. Reality returns when the curtains close.