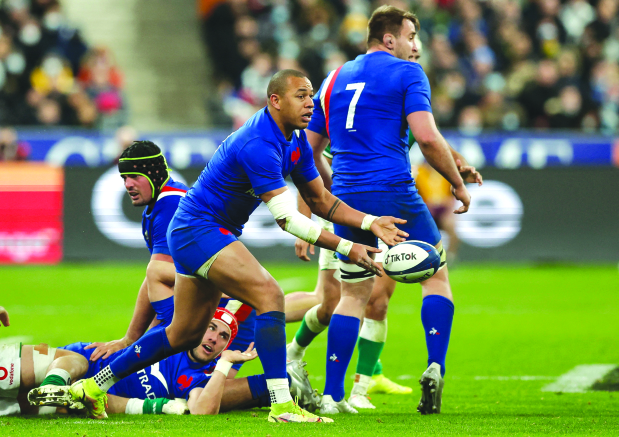 France underlined their status as Six Nations favourites but had to hold on for a 30-24 win over Ireland at the Stade de France yesterday having scored their first try after 70 seconds.

It was a second home win in a row for France, who beat Italy last Sunday, and are now the only side who can complete this season’s Grand Slam.

The clash was billed as a potential early title decider and had a high tempo with plenty of Gallic flair and a never-say-die attitude from the Irish.

Meanwhile, in Cardiff, Dan Biggar’s late drop goal proved the difference as Wales edged Scotland 20-17 in their clash at the Principality Stadium to register their first win of this year’s competition.

Captain Biggar marked his 100th test cap with four penalties and the 70th-minute drop in a contest that was full of exciting play in the first half but turned into a bruising physical contest after the break, when the two sides were tied at 14-14.

Tomas Francis contributed with a try for Wales while Darcy Graham scored for Scotland and Finn Russell, who was sent to the sin bin for 10 minutes at a crucial juncture near the end of the game, kicked over four penalties.

Scotland were seeking a first win in Cardiff in two decades after beating England at home last Saturday but fell despairingly short.

In Paris, it looked early on, however, as if France might run away with it. Dupont crashed over in the second minute after halfback Romain Ntamack’s clever half step and inside pass allowed the skipper to get the game off to a fiery start.

Jaminet extended the lead to 10-0 in the seventh minute but from the kick off after his successful first penalty, Irish wing Hansen plucked the ball out of the air to go over for a try that caught the French cold.

Jaminet then kicked over three more penalties for a 19-7 halftime lead and another soon after the break to extend it further.

Ireland began an impressive comeback when Van der Flier went over from a lineout five minutes into the second half and, five minutes later, scrumhalf Gibson-Park broke off the loose scrum and darted to the line after spotting a hole in the French defence.

Conversions from Carberry, who was starting his first Six Nations match in place of the injured Johnny Sexton, brought the score back to 22-21.

But France were quick to re-establish a buffer with Uini Atonio’s push to the line setting up a try for his fellow front-rower Baille.

France are now in the driving seat in the competition as they seek a first title since 2010.