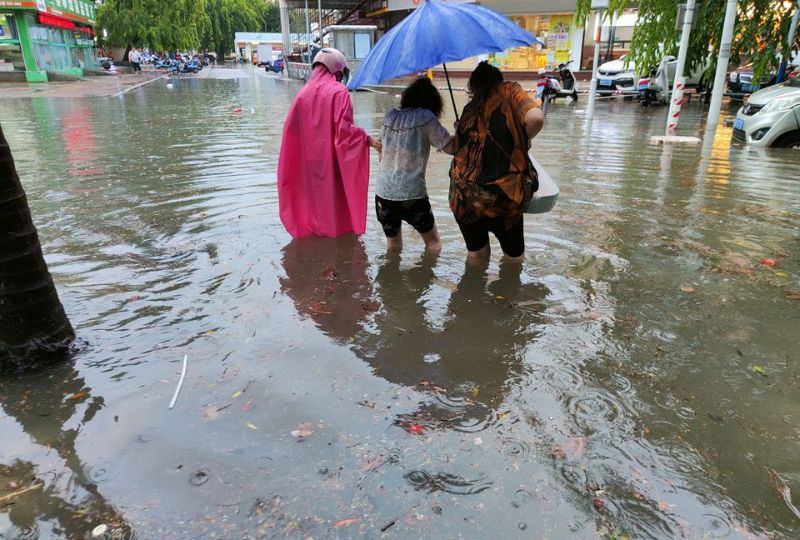 BEIJING: Heavy rain is expected to hit central and southern China over the next few days as the expansive rain belts of a weakening typhoon sweep inland from the country's southern coastline.

Over the weekend, China's first typhoon of the year bought heavy rain and wind to several southern provinces already water-logged from weeks of torrential rains and thunderstorms.

While the Central Meteorological Observatory has downgraded Chaba to a tropical depression from a typhoon, very unsettled weather is expected in its wake.

From Monday to Wednesday, forecasters predict heavy rain and some strong winds in Guangdong province, the Guangxi region, and Jiangxi, Hunan, Hubei, Henan, and Shandong provinces.

China is historically prone to floods, triggering landslides and swamping many acres of farmland, but increasingly intense rainfall and flooding are set to test its emergency response system in the coming years.

Rains have overwhelmed rivers, with 425 rivers above flood warning levels since late March, 80% more compared with the same period in the years before 1998, Liu said.

"Some shortcomings and weak links can be seen in our counter-flood and disaster relief system," Liu said, adding that China will step up weather monitoring and its flood storage capacity.

On Monday afternoon, the China Meteorological Administration activated its third-highest rainstorm alert, state broadcaster CCTV reported. China has a four-tier alert system where Level I signals the most severe warning.

The city of Jingzhou in central Hubei province issued a "red alert" for rainstorm at 8:45 am (0045 GMT). A red alert was also issued for the city of Dongguan in southern Guangdong province.

In Guangxi region, local forecasters issued red warning signals for the cities of Bobai and Luchuan, which have a combined population of nearly 3 million.

In waters off Hong Kong over the past weekend, more than two dozen crew on an engineering vessel with 30 people on board went missing after it snapped in two, authorities said. read more

In recent weeks, historic rainfall and flooding in southern China have destroyed property, paralysed traffic and disrupted the daily lives of millions.