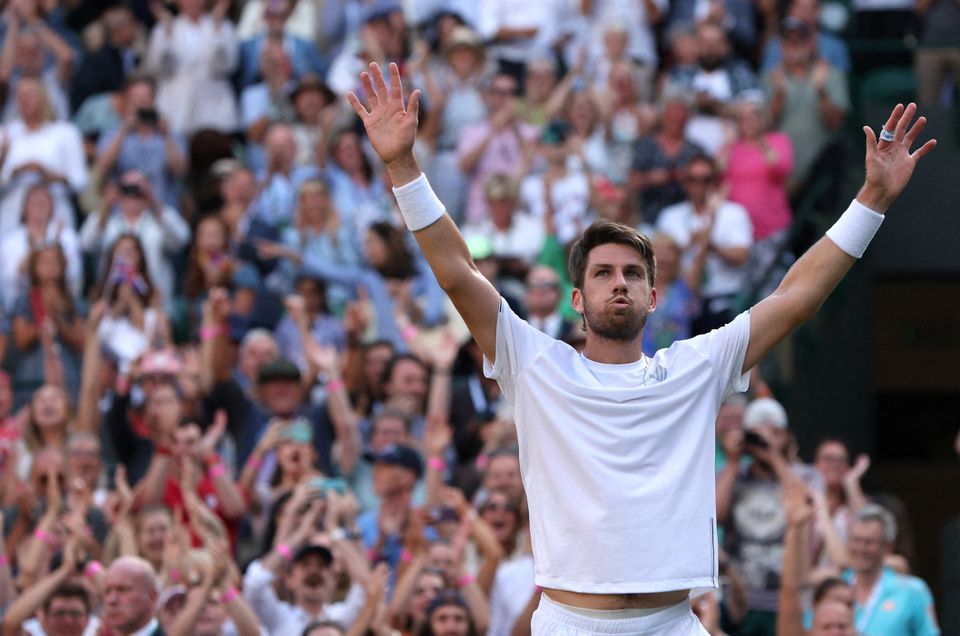 LONDON: It took Cameron Norrie over three sets to get "locked in" to the task of taming David Goffin in the Wimbledon quarter-finals on Tuesday but the Briton knows he cannot afford to leave it so late in his next match as he will be facing a rival his Belgian victim described as "an alien".

Over the last two decades, British fans have become accustomed to being taken on five-set rollercoaster rides on tennis' most famous stage by four-time Wimbledon semi-finalist Tim Henman and then twice champion Andy Murray.

The South African-born Norrie joined that select group on Tuesday when he fought back to reach his first Grand Slam semi-final with a 3-6 7-5 2-6 6-3 7-5 win over Goffin.

"Pretty crazy to be sitting here and in the semis. Crazy atmosphere, as well. Definitely enjoyed it. The crowd definitely got me through it. Pretty fortunate to get through that one," admitted Norrie after becoming only the fourth British man in the Open Era to reach the last four at the grasscourt major.

"At end of the fourth, start of the fifth, I was just locked in.... just a crazy day and crazy match to get through."

For 3-1/2 hours, the so called Henman Hill was heaving with thousands of fans who cheered on every point won by the ninth seed as they followed the action on the large screen located outside Court One.

While the British number one admitted that re-naming the hill Norrie Knoll is unlikely to catch on as "it doesn't roll off the tongue as well as Henman Hill", he knows he will have to rely on the partisan support when he tries to stop six-time champion Novak Djokovic from reaching a 32nd Grand Slam final.

"It's obviously one of the toughest tasks in tennis. I'd say grass is his favourite surface and his record is unbelievable here at Wimbledon. It's going to be tough," Norrie said.

"I'm going to have to improve a lot of things from today. A couple of times, lost a little bit of focus and managed to get it back. With Novak, there is no room for that."

Before this week, Norrie had not exactly been a household name in Britain as the left-hander had never previously been past the third round of a major.

But as he stands one win away from becoming the first British player to reach a Wimbledon final since Murray won the second of his All England Club titles in 2016, Norrie admitted he had surpassed his childhood dreams.

"When I was a kid and watching guys on TV making the quarter-finals, (I was) thinking 'Wow, this looks so tough to do, and there's almost zero chance I'm going to do that'," said the 26-year-old, who was beaten in his only previous meeting with the Serbian 20-time Grand Slam champion.

"But just to actually be doing it and to be living it and experiencing it is very cool and pretty crazy, actually. And now I have gone one further in the semis, so I think can take a lot of confidence from that.

"It's going to be a tough one against Novak obviously but looking forward to the challenge. I think I'm going to take it to him."

And exactly how did Goffin rate Norrie's chances of beating Djokovic?

"If he's playing the tennis of his life maybe, and Novak is not feeling well," said the Belgian.

"Novak is Novak. He's playing even better when the crowd is against him. Novak is just an alien."