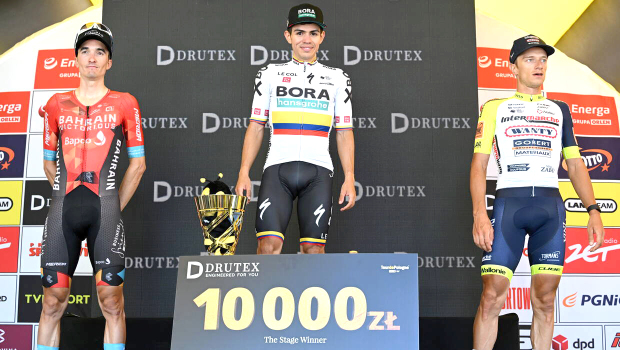 The third stage of the 79th Tour de Pologne ended, as had the first two, with Bahrain Victorious on the podium yesterday. This time it was the turn of Pello Bilbao to contest the general classification and saw him move up to second overall.

Day 3 was a gruelling 237.9km between Kraśnik and Przemyśl, ending with a wall with gradients of up to 15 per cent.

An early break had gained nearly eight minutes, but was reeled back in, as the GC teams pulled the peloton towards the final test. The steep slopes soon whittled down the group to 14, including Bilbao and Stevie Williams, still recovering after a hard crash on stage 1.

With 200m left, Pello was in fifth wheel, but he soon rolled past Quentin Pacher (GFC) and Matteo Sobrero (BEX). Quinten Hermans (IWG) was next, and was gaining on stage winner Sergio Higuita (BOH) coming across the line. Welshman Williams secured his second top 10 result of the season, on the same time.

It was an impressive show from Bahrain on probably the toughest stage of the race, especially given Bilbao’s break from racing since May.

He said: “We are showing we are in good shape, with a good attitude, and the team is working really well every day. Our goal was to fight on every single stage of the Tour of Poland, and to fight for the overall, but now we just need to hit the target!

I’m happy because I can see that the work I’ve done in the past few weeks preparing for this race is working; I’m quite explosive, I feel fresh, so that’s really good news, and I’m pleased to feel these legs and this punch.”

Stage 4 will be the first of the race under 200km, between Lesko and Sanok, with small climbs spread throughout the day, in particular two ascents within the final 40k before a punchy finale.