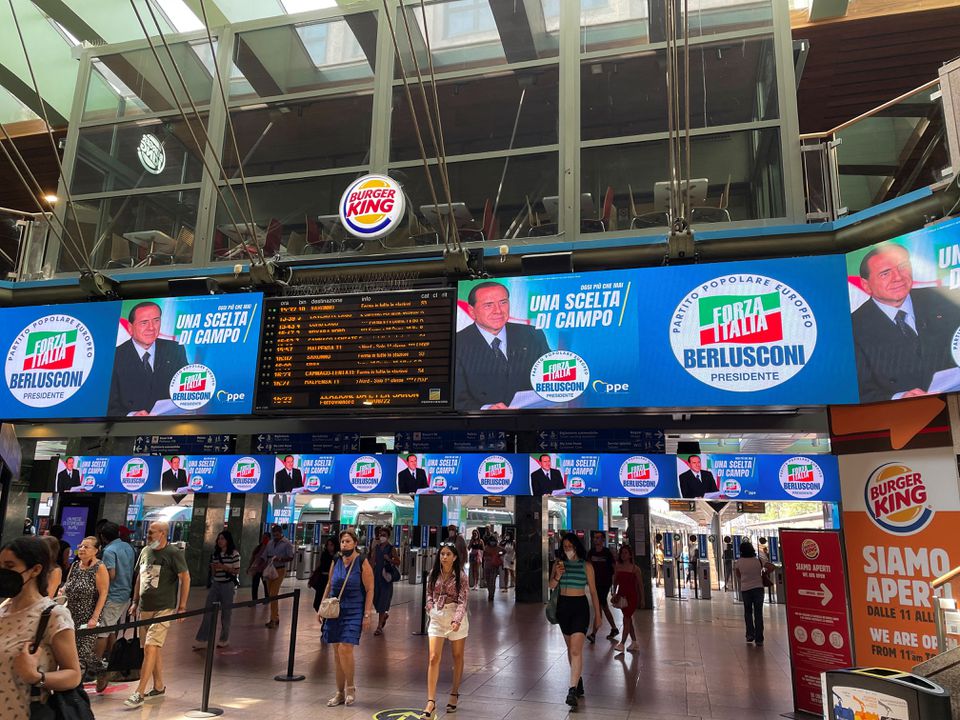 The face of former Italian Prime Minister and leader of the centre-right party Forza Italia Silvio Berlusconi (Go Italy) stands out in a series of election advertising videos at the Cadorna train station in Milan, Italy August 10, 2022. The videos with the inscriptions "Today more than ever a field choice" and "Berlusconi president" run continuously and are also accompanied by the notes of his party anthem as Italian parliamentary elections will be held on September 25, 2022. (Reuters Photo)

ROME - Eighty-five-year-old former Italian Prime Minister Silvio Berlusconi said on Wednesday he will run for a Senate seat at next month's election, seeking national office again after a nine-year absence.

The billionaire media magnate, who launched a trademark advertising blitz ahead of the announcement, has led four governments since entering politics in 1994 but was temporarily banned from office following a conviction for tax fraud in 2013.

His final government collapsed two years before that, enveloped by a mounting debt crisis and scandal over Berlusconi's sex parties in his villa outside Milan.

Berlusconi told state radio on Wednesday he had been urged by "masses of people" inside and outside his Forza Italia party to run at the Sept. 25 ballot, "so I think in the end I will be a candidate for the Senate, so everyone will be happy."

In his eighth national election campaign, Berlusconi is once again relying on the kind of full-throttled advertising campaign that has helped propel him to victory before.

Large screens in railway and underground stations around the country feature photos of a youthful-looking Berlusconi alongside the slogan "oggi piu che mai, una scelta di campo" -- roughly translated as "now more than ever, pick a side".

Forza Italia is considered the moderate arm of a conservative alliance dominated by two right-wing parties: Giorgia Meloni's Brothers of Italy, which leads in opinion polls, and Matteo Salvini's League.

With its centrist and leftist opponents badly divided, the bloc looks on track to win a clear majority at the election, which was triggered when Mario Draghi's broad "national unity" government collapsed last month.

Berlusconi's legal problems are not behind him. He is currently on trial on charges of bribing witnesses in a previous case, in which he was acquitted in 2014 of paying for sex with an underage prostitute.