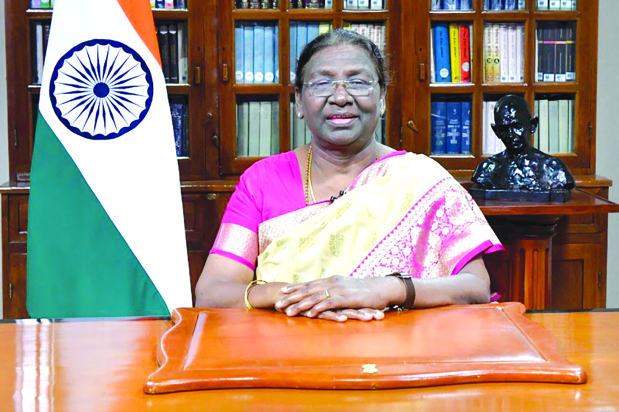 On the occasion of the Independence Day Anniversary of India, the President of the country Droupadi Murmu had the following to say:

“My heartiest greetings to all Indians living in the country and abroad on the eve of the 76th Independence Day.

“Today marks the day when we freed ourselves from the shackles of colonial rulers and decided to reshape our destiny. As all of us celebrate the anniversary of that day, we bow to all those men and women who made enormous sacrifices to make it possible for us to live in a free India.

“When India won independence, there were many international leaders and experts who were sceptical about the success of the democratic form of government in India. After so many years of exploitation at the hands of foreign rulers, India was marked by poverty and illiteracy.

“But we Indians proved the sceptics wrong. Democracy not only grew roots in this soil, it was enriched too. In most other well-established democracies, women had to wage long-drawn struggles to get the right to vote. But India adopted universal adult franchise right since the beginning of the Republic.

“For 75 weeks now, the nation has been commemorating these noble ideals that won us freedom.

“In March 2021, we began the ‘Azadi ka Amrit Mahotsav’ with the re-enactment of the Dandi March. This way, our celebrations began with a tribute to that watershed event which had put our struggle on the world map.

“Based on the success achieved by the people, the resolve to build ‘Atmanirbhar Bharat’ is also a part of this Mahotsav. This grand festival is going ahead with the ‘Har Ghar Tiranga Abhiyan’ and the Indian tricolours are fluttering in every nook and corner of the country.

“Many great freedom fighters did their duty and passed on the torch of awakening, leaving little trace of their heroic deeds. The government’s decision last year to observe November 15 as ‘Janajatiya Gaurav Divas’ is welcome because our tribal heroes are not merely local or regional icons but inspire the entire nation.

By the year 2047, we will have fully realised the dreams of our freedom fighters. We will have given a concrete shape to the vision of those who, led by Babasaheb Bhimrao Ambedkar, drafted the constitution.

“The world has seen a new India rising in recent years, more so after the outbreak of Covid-19. We launched the biggest vaccination drive in human history with vaccines manufactured in the country itself. Last month we crossed the 200-crore mark in cumulative vaccine coverage.

“In combating the pandemic, our achievements have been better than those of many developed countries. For this feat, we are grateful to our scientists, doctors, nurses, paramedics and the staff associated with vaccination. When the world has been battling the economic consequences of the great crisis, India got its act together and is now moving forward.

“India’s start-up eco-system ranks high in the world. The success of start-ups in our country, especially the growing number of unicorns, is a shining example of our industrial progress.

“Economic success is leading to an ease in living too. Economic reforms are rightly accompanied by innovative welfare initiatives. A home of one’s own is no longer a dream for the poor, but a reality for more and more people, thanks to the ‘Pradhan Mantri Awas Yojana’.

“At the core of the transformation we have been witnessing in healthcare, education, economy as well as a number of related areas is the stress on good governance.

“Gender inequalities are reducing and women are moving ahead, breaking many glass ceilings. At the grassroots level, we have more than 14 lakh elected women representatives in Panchayati Raj institutions.

“Our daughters are the biggest hope for the nation. Some of them brought laurels for the country at the recently held Commonwealth Games. Of course, India’s sportspersons have been making the country proud by their performance in international competitions.

“Before I conclude, I would like to extend Independence Day greetings to the armed forces, to the members of Indian missions abroad, and to the Indian diaspora who continue to make their motherland proud.

“My best wishes to all of you. Thank you, Jai Hind!”