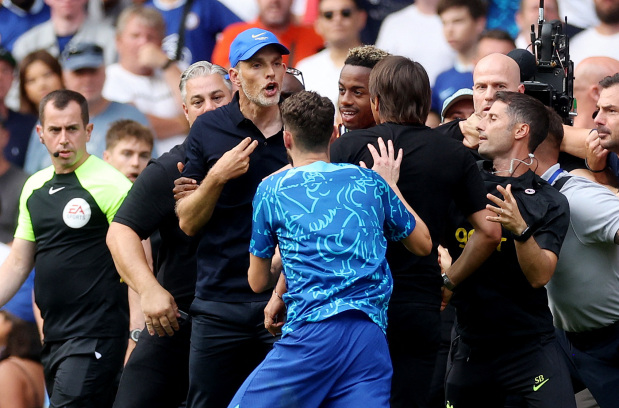 Reece James seemed to have sealed the points for the hosts with a 77th-minute strike but Kane rose to head home a corner in the sixth minute of stoppage time.

Chelsea manager Thomas Tuchel and his Spurs counterpart Antonio Conte, a former Chelsea boss, were both shown red cards after the final whistle as tempers boiled over on a sweltering afternoon in west London.

Centre back Kalidou Koulibaly marked his home debut in style by volleying Chelsea in front from a corner in the 19th minute and the hosts totally dominated the opening period.

Chelsea remained in the ascendancy in the second half and should have had the points wrapped up but were rocked when Pierre-Emile Hojbjerg equalised in the 68th minute.

Tuchel was furious that the goal was allowed, believing Kai Havertz had been fouled in the build-up and that Richarlison had been standing in an offside position, and clashed with Conte, earning both of them yellow cards.

Havertz then spurned a glorious chance to put Chelsea back in front but the hosts did reclaim their lead in the 77th minute when James fired past Hugo Lloris from a pass by Raheem Sterling -- a goal that sent Tuchel joyfully racing down the touchline.

Tuchel’s mood darkened though as Kane snatched a draw with his 42nd goal in London derbies -- one behind the record of former Arsenal forward Thierry Henry.

The two managers clashed again after an aggressive handshake before being separated by their coaching staff.

Chelsea and Tottenham, who finished third and fourth respectively last season, both have four points from two games.

“I thought when we shake hands you looked in each others’ eyes; he had a different opinion. It was not necessary but a lot of things were not necessary,” Tuchel said.

“We dominated for 90 minutes. We were sharp, we were hungry, it was a top performance. I’m sorry for all my players that we didn’t get the result we deserved.”

Tottenham, who began the season in optimistic fashion, could have had few complaints if they had gone home empty-handed but Kane’s late intervention means they have four points from two games, the same as Chelsea.

Tottenham have won only once in their last 38 visits to Stamford Bridge in all competitions.

A first-half goal from Taiwo Awoniyi was enough to earn Nottingham Forest a 1-0 win over West Ham United on Sunday, their first victory of the new Premier League season as the City Ground hosted top-flight soccer for the first time since 1999.

Awoniyi scored Forest’s first Premier League goal in 23 years in first half stoppage time and it proved to be the difference as both teams had goals disallowed by VAR and West Ham captain Declan Rice had a second-half penalty saved.

“I’m really happy about it because it took me a long journey to get back to the Premier League and I’m very, very proud of myself,” said Awoniyi, who was at Liverpool from 2015-21 but did not make a competitive appearance and was loaned out several times.

“It was a dream for me to score and for the team to win... I believe we will have a great season.”

Steve Cooper’s side had been outclassed by Newcastle United during their 2-0 defeat on the opening day but looked at home in the top flight against West Ham, who were also looking to bounce back from a 2-0 loss to champions Manchester City.