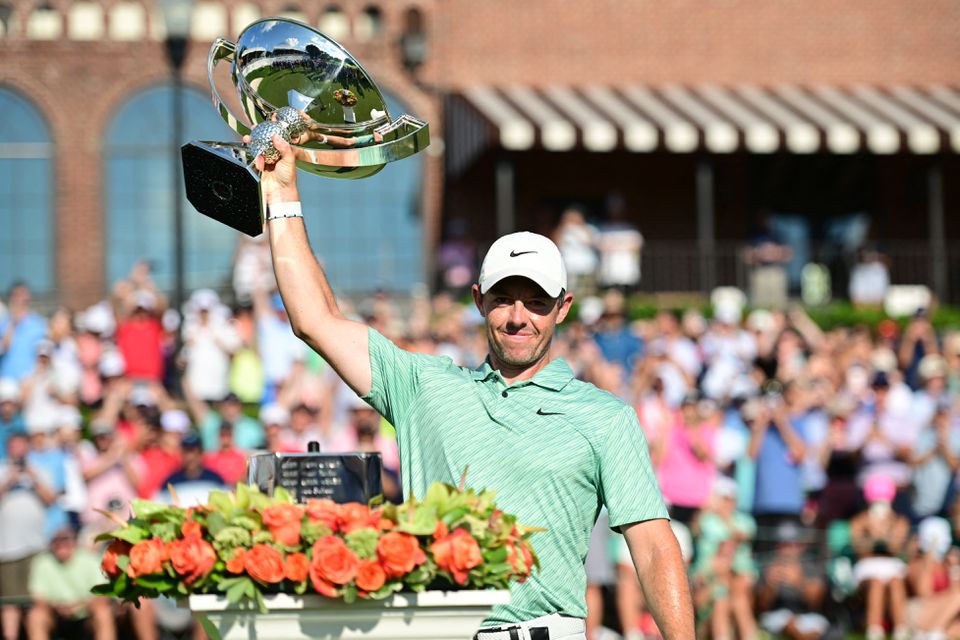 Rory McIlroy produced the largest final-round comeback in Tour Championship history to beat world number one Scottie Scheffler by one stroke in Atlanta on Sunday and then used the moment to sing the praises of the PGA Tour.

McIlroy, who began the final round at East Lake six shots back of Scheffler, carded a four-under-par 66 to reach 21 under on the week at the PGA Tour's season-ending event to capture his third FedExCup title and an $18 million first-place prize.

After being presented with the trophy, McIlroy, who has become one of the one of the most important voices for the PGA Tour amid the threat from LIV Golf, spoke about his passion for the U.S.-based circuit.

"That was a spectacle out there today. Two of the best players in world going head-to-head for the biggest prize on the PGA Tour and I hope everyone at home enjoyed that."

The final round was a back-and-forth tussle between McIlroy and world number one Scheffler (73), who were paired together, as they traded places atop the leaderboard while South Korea's Im Sung-jae (66) threatened but settled for a share of second.

McIlroy began the round with a bogey but responded with four birdies over his next six holes and walked off the seventh green level with a misfiring Scheffler, who made three early bogeys.

Scheffler moved back in front with a birdie at the eighth but McIlroy re-joined him atop the leaderboard with a six-foot birdie at the par-four 12th before falling a shot back after a bogey at 14.

McIlroy again grabbed a share of the lead, this time at the par-three 15th where his birdie putt from 31 feet rolled into the heart of the cup, lighting up the crowd and setting the stage for a tense finish.

At 16, McIlroy caught a lucky break as his fast-rolling chip was headed for the other side of the green until it slammed into the flagstick and settled eight feet from the hole from where he saved par while Scheffler bogeyed to fall one back.

"I feel sort of bad that I pipped him to the post," said McIlroy, who finished runner-up to Scheffler at the Masters and started the Tour Championship six shots back of the world number one given the event's staggered-strokes start.

"It was an honour and a privilege to battle with him today and I am sure we'll have many more. I told him we're 'one all' in Georgia this year. He got the Masters, I got this."

The previous largest final-round comeback at the Tour Championship came in 2008 when Camilo Villegas trailed Sergio Garcia by five shots but carded a 66 and went on to defeat the Spaniard in a sudden-death playoff.