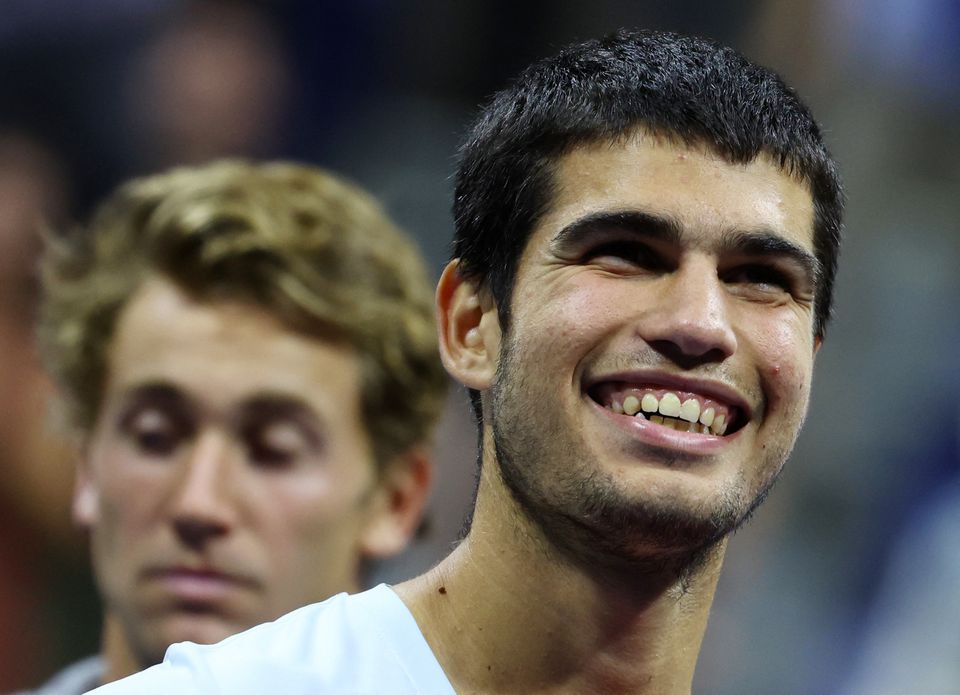 With a mighty serve and beaming grin, Carlos Alcaraz rocketed to the pinnacle of men's tennis at the US Open on Sunday, a remarkable turnaround for the 19-year-old just weeks after he said he had lost some of his joy for the sport.

The New York crowd had taken the Spanish teen to their hearts last year when he became the youngest man to reach a US Open quarter-final.

And their affections deepened on Sunday when he beat Casper Ruud 6-4 2-6 7-6(1) 6-3 to win his first Grand Slam and replace Daniil Medvedev as world number one.

After collecting a pair of Masters 1000 titles this year Alcaraz looked set to push for his first major title in New York but suffered a crisis of confidence in Montreal last month, losing his opening match.

He then exited the Cincinnati Open in the quarter-finals and said the pressure was getting to him.

"In Montreal and in Cincinnati I lost the joy a little bit," said Alcaraz. "I felt the pressure. I couldn't smile on court which I'm doing in every match, every tournament."

He arrived at Flushing Meadows determined to enjoy himself, he said, though the path to the final could scarcely have been more gruelling.

He survived three consecutive five-setters before meeting the Norwegian on Sunday, though the bruising schedule seemed to have little impact on the supremely athletic Alcaraz.

"He (was) born to play this kind of tournament, born to play these kind of matches," said his coach, fellow Spaniard and former world number one Juan Carlos Ferrero.

"He's a great competitor. He's there. He's trying all the time."

Ferrero, the 2003 Roland Garros champion, said he recognised the "explosive" talent in Alcaraz right away but they had to work hard to improve the physical side of his game.

"When he arrived to academy when he was 15, he was like a spaghetti, very thin. We had to work," he told reporters.

"We saw that he had very fast hands, very fast legs, but no muscles at all, not in the back, not in the legs. We had to work a lot. But obviously we saw something very special on him."

Alcaraz collected his first ATP title a little over a year ago in Croatia and has become the youngest world number one since the ATP rankings began in 1973.

"I'm hungry for more. I want to be in the top for many, many weeks. (I) hope many years," he told reporters.

"I'm going to work hard again after this week, this amazing two weeks. I'm going to fight for have more of this."