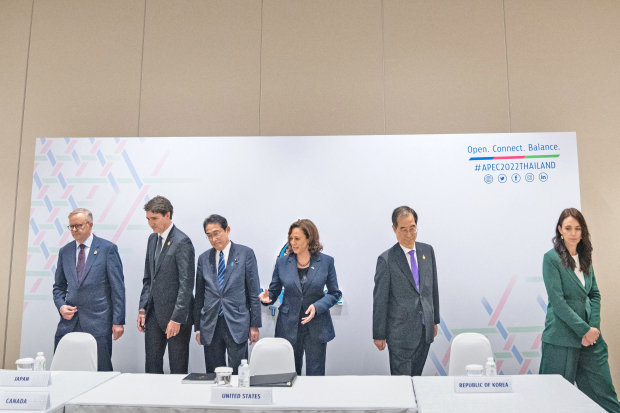 US Vice President Kamala Harris called an emergency gathering of several allies on the sidelines of an Asia-Pacific economic summit yesterday, emerging with leaders of five other nations to condemn North Korea after it test-fired an intercontinental ballistic missile capable of reaching the US.

North Korea carried out the missile test just hours before the 21-nation Asia-Pacific Economic Co-operation forum opened in Bangkok and Harris met to discuss it with leaders from Australia, Japan, South Korea, Canada and New Zealand. “This conduct by North Korea most recently is a brazen violation of multiple UN Security Council resolutions,” Harris said. “It destabilises security in the region, and unnecessarily raises tensions.”

A senior US administration official said the weapon tested yesterday was a “longer range missile ... that can hit many, many countries” and said the United Nations security council should meet to discuss North Korea’s latest launches.

The official said Washington was in regular contact with China, which along with Russia has blocked recent US efforts to strengthen UN sanctions on North Korea over its missile tests.

“We do think that Beijing has a role to play,” the official said.

While reiterating Washington’s offer to resume dialogue with North Korea without preconditions, Kirby said the US was working very hard with allies Japan and South Korea “to make sure that we have in place adequate defensive capabilities.”

Japanese Prime Minister Fumio Kishida warned of further missile launches by North Korea and a possible resumption of its nuclear testing for the first time since 2017.

Yesterday’s launch came after US President Joe Biden met his Chinese counterpart Xi Jinping on Monday and said Beijing has an obligation to try to talk North Korea out of resuming nuclear testing, while adding that it was unclear whether China would be able to sway Pyongyang.