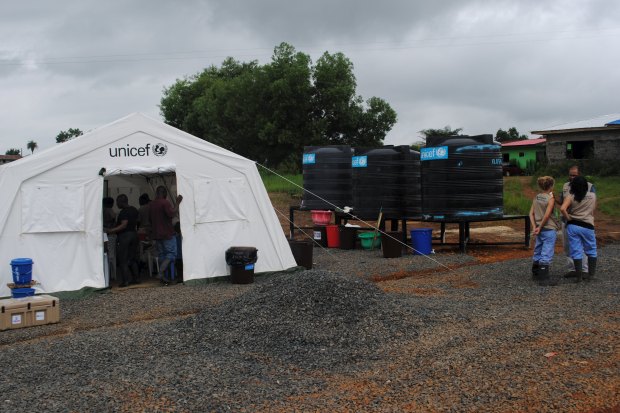 Health workers gather at a clinic in Nedowein, Liberia on Friday. (Reuters Photo)

United Nations: The leaders of Guinea, Liberia and Sierra Leone appealed on Friday for $3.2 billion in aid to put their countries firmly on the road to recovery from Ebola.

Liberia's President Ellen Johnson Sirleaf told a pledging conference at the UN that the "world has a great stake in how we respond to the global threat" of the Ebola epidemic.

"We can and we must return to the progress of our pre-Ebola trauma," she told the gathering.

Liberia suffered a setback when a few new cases were uncovered last month after the hardest-hit country had been declared Ebola-free.

New infections in Sierra Leone and Guinea have fallen dramatically amid indications that the epidemic is largely under control.

"Humanity sometimes displays a short attention span and wants to move to other issues because the threat of Ebola seems over," said Koroma.

The European Union pledged 450 million euros ($500m) at the outset of the conference to support health care, agriculture and other hard-hit sectors.

The $3.2bn in requested aid will help the three countries put in motion their national recovery plans to get hospitals, schools and government services fully up and running.

Around 30 people are still being infected with Ebola every week, said David Nabarro, the UN's coordinator for Ebola.

"The strategy to end the outbreak is working," said UN Secretary General Ban Ki-moon, "but the final stretch of the response remains particularly challenging."

Legions of health care workers died from Ebola and field hospitals built at the height of the crisis have since closed, leaving health systems struggling.

The loss of health workers could lead to an additional 4,022 deaths of women each year across Guinea, Liberia and Sierra Leone as a result of complications in pregnancy and childbirth, according to the World Bank.

The World Health Organization has said the three countries are facing a funding gap of $700m just to rebuild their health systems and provide services until December 2017.

Liberia, the hardest-hit country, and Sierra Leone have seen modest gains made after years of war wiped out by Ebola.

Growth rates in all three countries showed that economic prospects were bright before the outbreak that began in Guinea in December 2013.