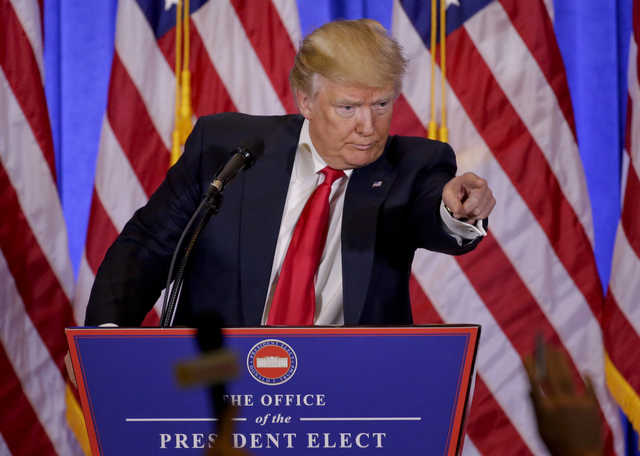 Pasadena, California: President-elect Donald Trump and his team on Wednesday attacked news organisations that spread unsubstantiated reports about a damaging dossier collected on him by Russia, an incident that illustrates how old rules of journalism are tested in today's rapidly changing media world.

Trump called BuzzFeed "a pile of garbage" for publishing the allegations and got into a spat with CNN's Jim Acosta during his first news conference since July. He praised organisations that didn't follow BuzzFeed's lead.

The untraditional news conference, less than two weeks before Trump's inauguration, was dominated by questions about Russia and the president-elect's relationship with the intelligence community.

CNN on Tuesday reported that Trump had been briefed by intelligence officials about compromising personal and financial information that Russia had collected on him. The network did not give details about the information, saying the charges had not been verified, but BuzzFeed soon published them. Most reputable news organisations, following up the story, also did not report the details.

Despite those decisions, it took only the single report for the news to spread so rapidly that within hours, one specific, salacious allegation was a top trending topic on Twitter.

At his news conference, Trump set up a bad cop-good cop dynamic. Incoming White House press secretary Sean Spicer and Vice President-elect Mike Pence both preceded Trump and sharply condemned those who spread the story. Spicer called BuzzFeed's decision "outrageous and highly irresponsible," while Pence said it was an effort by some in the media to delegitimise the election and discredit the incoming administration.

"The American people are sick and tired of it," Pence said.

Meanwhile, Trump credited The New York Times, a newspaper he's often been at odds with, for its decision not to publish what it could not independently verify.

Under questioning, he criticised both CNN and BuzzFeed. He said BuzzFeed is "going to suffer the consequences. I think they already are."

He got into a sharp back-and-forth with Acosta, who said to the president-elect, "you are attacking our news organisation. Can you give us a chance to ask the questions?"

"I am not going to give you a question," he said. "You are fake news."

He later took a question about intelligence leaks from another CNN reporter, Jeremy Diamond.

CNN's Jake Tapper criticised Trump for conflating CNN and BuzzFeed, since CNN did not publish the specific allegations and BuzzFeed did. The network said reporting on the inner workings of government represented the core of what the First Amendment protects.

"Given that members of the Trump transition team have so vocally criticised our reporting, we encourage them to identify, specifically, what they believe to be inaccurate," CNN said in a statement.

However, BuzzFeed CEO Jonah Peretti on Wednesday compared BuzzFeed with other news organisations that made a very different decision on how to proceed with the story.

"We were criticised by the incoming administration," Peretti said. "We are not going to respond to these divisive comments, which put us in great company, by the way — The New York Times, CNN and The Washington Post have all been attacked. So has Meryl Streep and the cast of 'Hamilton,' but we'd never compare ourselves to people that talented."

BuzzFeed's decision did revive what has become an increasingly common debate in the media world. News organisations can make very careful decisions about what to publish when they are not certain of the veracity of the information, but it only takes one rival with different standards to undermine those deliberations.

While admitting that some of the allegations may not be true, BuzzFeed editor Ben Smith explained that he wanted to publish the information so Americans can make up their own minds about allegations circulating throughout government.

"People of good will may disagree with our choice," he wrote. "But publishing this dossier reflects how we see the job of reporters in 2017."

The Associated Press is among the news organisations that has been aware of the documents and has attempted to authenticate them. The AP determined publishing the details did not meet its criteria.

"The purported sourcing was anonymous, which made it impossible for AP to determine if the sources were credible or in a position to know the facts about any allegations being made," said John Daniszewski, vice president for standards and editor at large.

"After learning these documents were included in a high-level briefing to the president and the president-elect by intelligence officials, the AP decided it newsworthy to report their existence. However, it continues to refrain from reporting specific material that has not been verified or corroborated."

Kelly McBride, a media ethicist for the Poynter Institute, compared BuzzFeed's action to document dumps by websites like WikiLeaks.