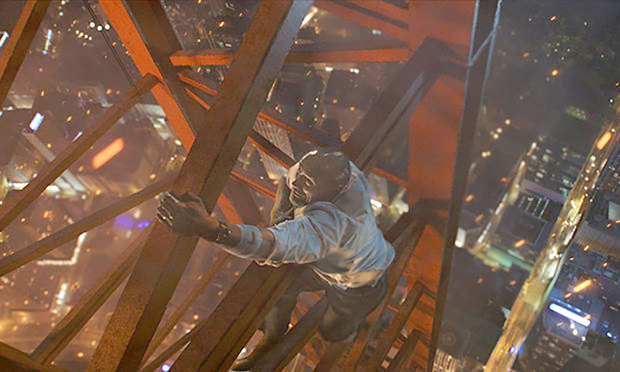 Dwayne “The Rock” Johnson again steals the show, proving why he is Hollywood’s highest paid actor in this action-packed, nail-biting, edge-of-your-seat thriller.

The formula seems a simple one: cast the former WWE champion in any lead role, sit back and watch him turn a film into a blockbuster!

He has done it again here, although this time there is a small twist.

Reprising his familiar role as an unstoppable athlete that has become his trademark, this time he must also become an action hero with one leg.

His challenge? To rescue his family from a massive blaze in the world’s tallest building, a fictional tower called The Pearl, in Hong Kong.

His execution could have been better, but never fear – The Rock is here!

Any flaws in the movie are largely obscured by Johnson’s acting talent, not only his physical size.

The man has an uncanny ability to make any concept on the big screen work.

As for the plot, imagine a crossover between the 1974 disaster classic The Towering Inferno and Die Hard (1988).

The film has the added advantage of the latest special effects technology, which helps set the stage for a thrilling – and often scary – rollercoaster ride around a one-kilometre tall skyscraper, which gets set on fire by mercenaries.

Luckily, Johnson’s character Will Ford is a former FBI hostage rescue team leader and war veteran whose job is to assess skyscraper security.

Not so luckily for him, he gets framed for the arson and must not only rescue his family from above the fire line on the 96th floor, but also find those responsible and clear his name.

To top it all off, he must do it with a prosthetic limb – after losing his leg in a blast years ago.

Neve Campbell, who plays the trapped wife, must also protect the couple’s twins – aided in no small part by her character’s own military training.

Skyscraper is an entertaining movie that the whole family will enjoy, although some of the violence means it comes with a PG-13 rating.