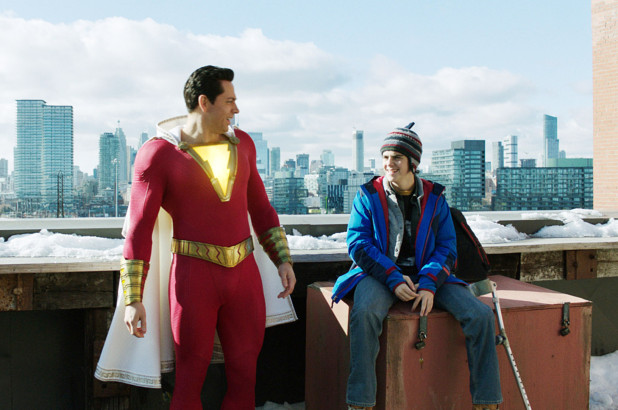 DC’s Shazam! comes as a breath of fresh air at a time when most creators of superhero movies are not shying away from using intense and complicated plotlines where either half of the earth’s population is wiped out or the protagonist’s suffocating struggles are too much to handle.

Director David F Sandberg has delivered a gem with a simple, yet gripping, story and lots of moments that will make you laugh your head off.

Billy Batson (Asher Angel) is a teenager who gets separated from his mother when he is a child. As he grows older, the angsty boy moves from foster home to foster home while trying to find his mum.

Billy finally lands at a foster home to meet Freddy (Jack Dylan Grazer), a comic-book nerd, and four other displaced kids. It is around this time that Billy encounters a wizard (Djimon Hounsou) who chooses him to be his successor and gives him the power to become the superhero Shazam.

And the fun begins - Billy can now transform into a full grown man (Zachary Levi) with magical powers by just saying the word Shazam.

Billy, with Freddy, then explores his superpowers just like a teenager would.

And that is the USP of this movie - a superhero brimming with vigour and youth and who does not take himself too seriously. It also gives us a realistic look into how a teenager who is suddenly bestowed with superpowers would behave.

Mark Strong has given an impressive performance as Shazam’s formidable adversary Doctor Sivana.

A disgruntled Sivana - who was found unworthy of becoming Shazam - plays the villain who very predictably wants to defeat the superhero to usurp his magical powers.

And thus ensues the fight between good and evil. However, Sandberg’s approach is refreshing and exciting and you do not get bored at any point in the movie.

I give Shazam! a well deserved 8 out of 10 stars for being an out-and-out entertainer that can be enjoyed by all ages.