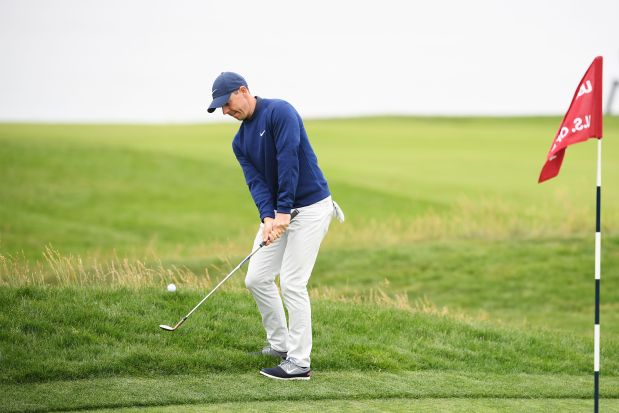 Rory McIlroy of Northern Ireland chips to the green on the 11th hole during the third round of the 2019 U.S. Open at Pebble Beach Golf Links (AFP)

Pebble Beach, CA: Thoroughbreds Rory McIlroy and Louis Oosthuizen and untested Chez Reavie know they will need near-perfect performances on Sunday to have a chance of winning the U.S. Open.

At least they have a chance, however, which is all that most players ask before starting the final round.

Oosthuizen and Reavie will tee off equal third with Brooks Koepka, four strokes behind leader Gary Woodland, who sets the pace at 11-under-par 202, one shot ahead of Justin Rose.

McIlroy is five shots behind, alone in sixth place, and he spoke optimistically of his chances after a morale-boosting birdie at the par-five 18th.

"Even though I'm still a few off the lead, it's a wonderful opportunity for me to go out there and try to add to my major tally," said the four-times major champion from Northern Ireland.

"I've been very pleased with how I've played all week. I felt for the most part today I did the right things. And I need to do 18 more holes of that, but just get a little bit more out of the round tomorrow than I did today."

The first seven holes at Pebble Beach are where birdies are easiest to come by, but McIlroy said he would resist the temptation to push too hard, too early.

"Those first seven holes you can get some momentum going and you can play them in three-or-four-under, and that's where the real meat of the golf course starts," he said.

"I'm going to take it as it comes. Yes, I'd love to play those holes in a few under and get myself right in the thick of things, but I can't put myself under pressure to do that because you've just got to let it happen."

Oosthuizen, meanwhile, said he could not afford any mistakes.

"I feel like I need to start well and just play a great round," said the South African, who won the 2010 British Open at St. Andrews, and lost a playoff there in 2015.

"I've been there and know what the pressure is going to be like," he said.

"For us trailing, you don't have that pressure of the lead, and just go with everything tomorrow.

"If you think you can take something on, take it on. If you want to win the championship, you need to do that."

Reavie is the long shot of the contenders, a journeyman whose lone PGA Tour victory came at the 2008 Canadian Open.

He has, however, been in solid form of late, including a tie for 14th at the PGA Championship last month.