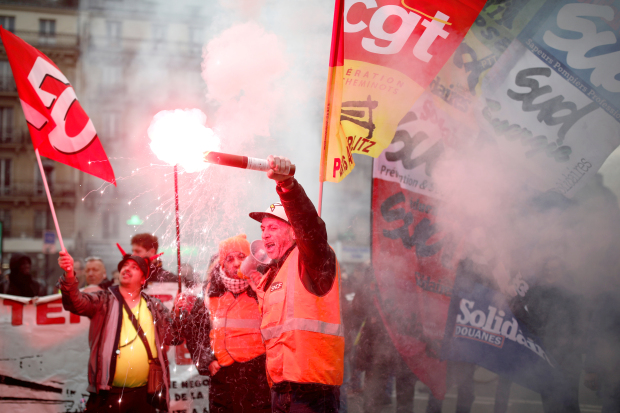 PARIS: Protesters marching against the French government’s planned pension reform clashed with the police in Paris yesterday as police fired tear gas to disperse some groups of demonstrators.

Yesterday “yellow vests” – an anti-government movement that sprung up a year ago as a backlash against the high cost of living – joined a rally of several thousand people against the pensions shake-up.

Police used tear gas against protesters close to tourists hotspots like the Centre Pompidou museum of modern art, where some demonstrators had tried to erect barricades and set fire to them, and smashed up a bus stop.

Clashes broke out at other points of the demonstration too, although the protest was dying down by the late afternoon.

Jerome Rodrigues, a prominent figure in the “yellow vest” movement, was hurt in the eye although it was not immediately clear how he had sustained the injury. Rodrigues was blinded in the same eye earlier this year during another demonstration.

France’s transport network remained disrupted across the country and in Paris on the last weekend of the year, and rail and metro workers have so far insisted they will keep pressure on Macron to abandon his overhaul.

“We’re ready to hold for quite a while,” said Laurent Djebali, a representative of the metro branch of the Unsa union as he joined the march.

Macron has touted his reform as conducive to a fairer system that will incentivise workers to stay in the labour force until 64 instead of 62 and balance the pension budget, while eliminating many special regimes.