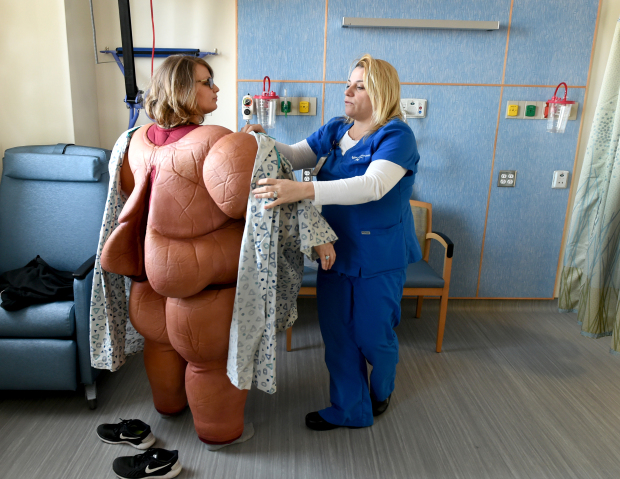 In this file photo, nurse Brittany Boebert, left, is assisted by nurse Bethany Mulone, a bariatric educator, in trying on a bariatric patient simulation suit used for training at the dedicated Bariatric Surgery Unit on the Saint Raphael campus of Yale-New Haven Hospital. (AP photo)

Trenton: Finances and fear deter many morbidly obese patients from having stomach-reducing bariatric surgery, but it's steadily becoming more common.

The surgery is expensive: from $7,000 to $50,000, varying by type of procedure and location. Even if it's covered by insurance, copayments can reach $10,000, meaning patients often have to seek financial help from family and friends or borrow money.

Yet bariatric surgery reverses or improves dozens of disorders, including expensive, life-threatening ones such as Type 2 diabetes. Research shows eliminating those conditions reduces patient care costs by about 30 percent within five years, and insurers recover their costs within two to four years by averting hospitalizations and other medical expenses.

Patients can keep working longer as well, said Dr. Raul J. Rosenthal, president of the American Society for Metabolic and Bariatric Surgery. The society estimates 193,000 procedures were done in 2014, up 22 percent since 2011.

Rosenthal said patients without good insurance sometimes get financial help from family and friends, while others sell their car or take out a bank loan or second mortgage.

Elyssa Einhorn, 23, of Fort Myers, Florida, thinks the expense was worth it. She had a "sleeve gastrectomy" that reduced her stomach volume to three ounces in January 2014. Her insurance covered 90 percent of the cost and her parents paid the remaining $3,500.

Einhorn now takes long walks and jogs short distances. She's off a diabetes drug, with her blood sugar again normal. And she now spends half as much on food.

"I feel great every day," she said. "It's been a complete life change."

But it wasn't easy: Einhorn endured a restrictive diet for a year, with occasional abdominal pain until her stomach could handle certain foods and hot or cold liquids. She still eats small portions and exercises often.

Given the high costs, patients must weigh risks and advantages to pick the best procedure for them. Here's a primer:

After debuting in the 1950s, bariatric surgery didn't take off until 1994, when minimally invasive surgery made operations easier and cut recovery time to a couple weeks. Now only about 4 percent of patients suffer major complications.

"This is safe surgery," Rosenthal said.

The surgery is generally appropriate for people more than 100 pounds overweight, with a body mass index of 40 or higher, or 30 if they have related diseases.

Most patients lose and keep off substantial weight, often 100 pounds or more. And after surgery, Type 2 diabetes, high blood pressure, cholesterol problems and sleep apnea vanish in 60 percent to 80 percent of patients, while others improve somewhat, one recent study found.

Possible complications include injury to internal organs during surgery, infections, diarrhea, stomach pain, ulcers and heartburn. Other risks are specific to the procedure, such as gastric bands eroding stomach tissue.

All patients risk osteoporosis and other malnutrition-related conditions, so they take daily nutritional supplements.

The costs, including preoperative testing, surgery, follow-up and surgeon and hospital fees, range from about $7,000 to $30,000, according to Rosenthal, who heads Cleveland Clinic's Bariatric and Metabolic Institute near Miami.

—Gastric bypass, the first widespread surgery, has been done for a half-century. The surgeon reduces the stomach to walnut size, attaching what's left to the middle of the small intestine. Approximate cost: $22,000.

—Gastric banding is easily reversible, but many patients regain weight. An adjustable silicon band, filled with saline, is wrapped around the stomach's top, leaving a small food pouch. Approximate cost: $16,000.

—Sleeve gastrectomy, much newer, already comprises half of bariatric surgeries because it's an easy procedure. The stomach is stapled vertically, creating a banana-shaped food pouch; the other 85 percent is removed. Approximate cost: $19,000.

—Duodenal switch, or BPD-DS, is the most complex, longest surgery at 2 hours. It involves reducing the stomach, removing the gall bladder and rerouting other parts of the digestive system. It generally brings the most weight loss — and the most complications, including severe diarrhea. Approximate cost: $26,000.

—Gastric balloon is mainly used for patients shedding pounds before procedures such as hip replacements. A balloon is inserted in the stomach via the mouth, then inflated to reduce space for food. It must be replaced every six months. Approximate cost: $5,000 to $9,000 each time.

Medicare has covered bariatric surgery for two decades. Aetna, Cigna, UnitedHealthcare and Blue Cross now cover it, but many smaller insurers don't. Big employers offer it but few small ones do, said Dr. John Morton, chief of bariatric surgery at Stanford University School of Medicine in California. Only 23 states have health care exchanges that cover bariatric surgery, and Medicaid pays so little that few surgeons accept that coverage, he said.

There's lots of red tape to get prior authorization. Patients must have been morbidly obese at least three years, failed on a medically supervised diet, undergo numerous tests and more.

If your insurance covers it, check which surgeons are in network and board-certified. Visit http://asmbs.org to find accredited surgeons and other information.

Ask your prospective surgeon about experience, success and complication rates, and whether fees include the cost of follow-up surgery — needed to fix problems in about 10 percent of patients. Ask why the surgeon recommends a particular procedure and what to expect afterward.