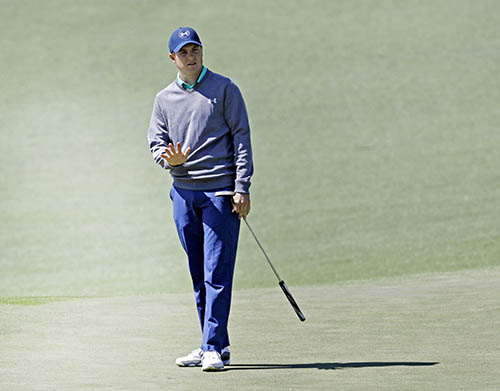 Augusta, United States: Jordan Spieth put some distance between himself and Rory McIlroy in their Masters showdown yesterday after they marched out together in the third round’s headline-catching final pairing.

With Augusta National baring its teeth through gusting winds and super-slick greens, the 22-year-old Texan was errant off the tee.

But he scrambled superbly time and again to save par and a birdie at the second allowed him to pull three shots clear of his 26-year-old rival from Northern Ireland.

McIlroy found fairway bunkers on the second and third and his snaking 18-footer at the latter stopped just short to deny him his par.

Only two other players were under par at that stage – Japan’s Hideki Matsuyama and American Scott Piercy, both grinding along at 1-under.

Spieth and McIlroy, along with top-ranked Jason Day, a 28-year-old Australian, are the flag-bearers of golf’s new generation, taking over top-billing duties from fast-fading Tiger Woods.

And their first weekend outing together at any major drew a huge crowd at Augusta National on a blustery day of high scoring.

Defending champion Spieth started the day leading the tournament for the sixth straight round, but he saw a five-stroke lead crumble to just one by the end of Friday’s action.

He was on 4-under at the halfway stage, one clear of McIlroy, who moved ominously up the leaderboard in the second round with a fine 71 in tough playing conditions.

Day trailed on 145, but he was just five strokes off the pace and still very much in the hunt.

McIlroy also has much at stake this week as he tries, for the second straight year, to become just the sixth man to win all four major titles, joining Woods, Nicklaus, Gary Player, Ben Hogan and Gene Sarazen.

But he also has another matter to settle with, his final-round collapse in the 2011 Masters –when he let slip a four-shot lead on the last day – still festering in his mind.

“I sort of feel that Augusta owes me something and I have come with that attitude,” he said Friday. “I have come here to get something that I should have had a long time ago.

Day, who won the last major to be contested at the PGA Championship last August, remained optimistic despite back pain concerns.