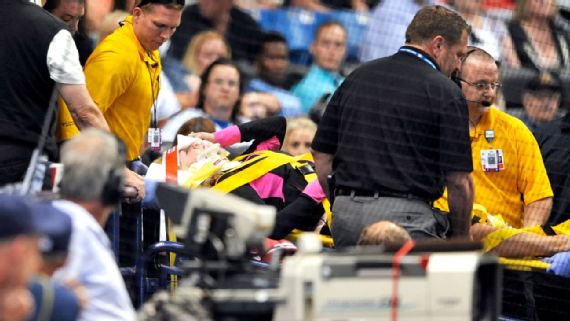 A fan who was struck by a foul ball in the seventh inning of Friday's White Sox-Rays game was removed from the stands on a stretcher. (AP Photo)

A fan was taken to hospital after being struck in the head by a foul ball during the Tampa Bay Rays' game against the Chicago White Sox at Tropicana Field in Florida on Friday.

The game was held up for several minutes as the woman was carried out of the ballpark on a stretcher and taken to Bayfront Health medical centre in St. Petersburg for treatment.

Steven Souza Jr's foul ball came through a narrow gap in protective netting before striking the woman left of the Rays' first-base dugout.

Souza climbed into the stands to check on her and said it had been hard to re-focus after seeing the extent of her injury.

"That women's health is way more important than my results in the game," Souza told reporters after the 1-0 win.

"She was beat up pretty good. It looked like it caught her right in the eye, which wasn't a good sight. It's just so unfortunate."

The incident comes after Major League Baseball recommended late last year that all 30 clubs provide netting or other protection for fans from dugout to dugout as a safety precaution from foul line drives.

Rays manager Kevin Cash said: "You feel for the lady and her family.

"The last thing you want to do is come to a ballgame as a player, as a coach or as a fan and see anybody get hurt."