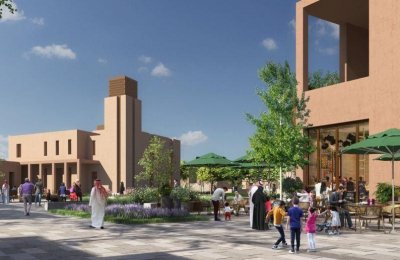 Roshn, a leading Saudi real estate developer, has announced the launch of its new Riyadh community project coming up in the north of the capital city near King Khalid International Airport, featuring over 30,000 homes.
The Roshn Riyadh, which will come up on a 20 million sq m area, is the first community to be announced by the developer as part of a 10-year mandate to develop communities across the kingdom. The project will be implemented in eight phases, it added.
The kingdom's newest real estate group, Roshn was set up in August this year by Saudi Arabia's Public Investment Fund (PIF) to develop world-class integrated urban communities across the kingdom.
On its flagship project, Roshn Group CEO David Grover said: "The announcement of the Riyadh community represents the initial step in the realisation of our vision to become the most trusted community developer in Saudi Arabia."
"We are deeply committed to contributing to Vision 2030’s plans to increase the rate of home ownership in the country to 70%, whilst delivering high-quality homes and excellent amenities to the Saudi people," he noted.
The Roshn Riyadh community is conveniently located close to the city’s main attractions, key highways and transportation links, with mosques, shops, cafes, parks, schools, and leisure and entertainment facilities, said the developer in a statement.
According to Grover, the architectural design of the community has been carefully considered to reflect the best of modern living whilst celebrating Saudi Arabia’s rich culture and heritage.
"The communities will provide homes to meet the needs of all Saudis offering modern living within a traditional setting, he noted.
Off-plan homes will be available for sale during the first half of 2021, he added.-TradeArabia News Service