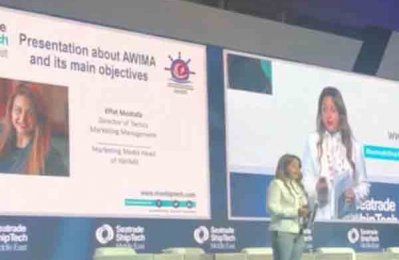 Impressive credentials and a vast experience in the maritime industry have underlined the achievements of Effat Mostafa, Executive Director at Tactics Creative Communication and Managing Editor of Marasi News. Owing to her many accomplishments, Mostafa was recently named among the 100 Most Powerful Arabs under 40 by Arabian Business.
With over nine years of experience in the maritime industry in various media roles, she is extremely passionate about the maritime industry and continuously strives to ensure that entities within the industry grow through well-thought-out media and marketing strategies, a statement said.
As part of the thriving industry, Mostafa has to her credit extensive successful projects with several clients from the government and the private sector. Her objective through her role as a media expert is to curate bespoke communications strategies and messages that are aligned with the business objectives of the entities. She leads a team of media professionals who are responsible for developing communication strategies including publications, partnerships, media marketing, social media, media outreach and conferences for esteemed clients in the industry.
As part of the UAE delegation, in 2019 Mostafa was selected as the official Marketing Comm. Officer for the IMO Women Committee’s AWIMA. Her responsibilities include managing all associated branding and initiating and implementing strategies internally to execute marketing communication activities externally, in addition to supervising all other marketing activities for future events.
Eng. Hessa Al Malek, Advisor to the Minister for Maritime Transport Affairs, The UAE Ministry of Energy and Infrastructure and President, AWIMA said: “It is a moment of pride to see a woman from AWIMA be a part of such a prestigious list. As a part of AWIMA, through her various pioneering endeavours, Effat has contributed greatly to ensuring that the gender gap in the industry is reduced. She has fostered greater recognition for the role of Arab women as a resource for the maritime industry. This is a milestone achievement that is well deserved. With her capabilities and foresight, I am confident that she definitely will go a long way and achieve greater feats in the maritime industry.”
Commenting on this achievement, Mostafa stated: “It is an honour to be listed among some of the most influential names in the Arab world. Since my foray into the industry, I have been fascinated with the dynamics of it and have always aimed higher, every step of the way. Whether it is my stint at Tactics, Marasi News of even AWIMA, I have always been passionate about what I do, working towards the greater goal of promoting the growth of the local and regional maritime industry. Shedding light on the capabilities of women and their valuable contribution as part of the maritime workforce is one cause that has always been at the heart of my work.”
Mostafa’s career progression has been upward, helping her earn a number of accolades that have gained her credibility in the industry. She is the youngest Arab journalist who has successfully published more than 500 articles, covering different fields within the maritime sector. She is also a contributing writer in several UAE newspapers such as Gulf Today and Al-Watn. Her published articles have been anthologised in different books and journal essays such as “Issues in Comparative Politics” that was published in the US by Todd Landman.
In 2015, she became the youngest Exco-member for the International Women in Shipping and Trading Association (WISTA) and was selected as one of the official speakers and moderator to talk about women empowerment in the maritime industry at Seatrade ME 2018. She has also been a panelist at well-reputed media forums such as Young Arab Media Forum and PR Pressure Conference.—TradeArabia News Service