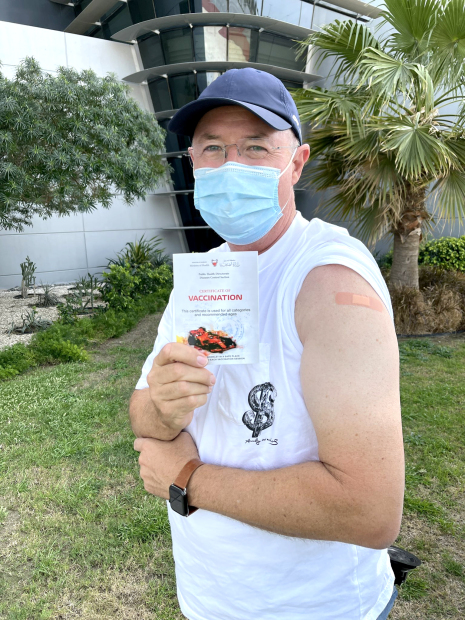 Illman with his vaccination booklet after receiving his first dose

A NUMBER of F1 personnel and members of the international media have been receiving their first doses of the Pfizer vaccine at the McLaren centre in Sakhir.

Many took advantage of the day off yesterday between Formula 2 and Formula 1 testing to get their jabs and receive their special F1 vaccination certificate booklets, right outside the Bahrain International Circuit (BIC).

“Because I am here for 22 days, I can get the first jab today and jab two on the day before I travel,” Australian F1 photographer Kym Illman revealed on his YouTube channel after the vaccination.

“The jab was provided at no charge. I walked into the centre; there are four registration desks and some security officials asked for my passport and temporary ID card. Then I took a seat; there were about 30, and I waited for my turn.

“There were four vaccination rooms. When I went into the room, I signed a waiver and got my jab within about four minutes.

“Going in, I was a bit apprehensive and excited. Apprehensive, because I am a long way from Australia. And excited, because it is going to make me feel a whole lot safer.

“After the vaccination, I waited in the observation area for probably 12 minutes and then we were invited to leave.

“Going forward, I think the F1 vaccination certificate will certainly help with my travels this year. It’ll enable me to get into countries, perhaps a little easier than it would be, had I not been able to get the vaccine.

“To be able to get the vaccine within a couple of days of landing in Bahrain, compliments of the Health Ministry, is a real weight off my mind and I take my hat off to the Bahrainis for doing that.”

Some Formula 1 team members, including from Ferrari and Mercedes, have taken up Bahrain’s offer of Covid-19 vaccinations ahead of testing and this month’s season-opener despite the sport’s reluctance to jump any queues.

Italy’s Gazzetta dello Sport newspaper reported that 90 per cent of Ferrari staff in Bahrain had accepted the offer of the Pfizer vaccine on arrival.

There was no official comment from the Italian team.

Mercedes team boss Toto Wolff, who has had the virus, told German reporters last week that his British-based team would leave it to individuals to decide.

A spokesperson at McLaren had previously confirmed to the GDN that the decision was being left to individual members of the team.

The BIC has offered vaccines to all participants ahead of this weekend’s testing, with the second jab to come 21 days later, after the March 28 race.

British-based Formula One at the time ruled out being vaccinated as a travelling group and chief executive Stefano Domenicali told reporters the most vulnerable in society remained the priority.

When reached for comment about the F1-related personnel receiving vaccines, a BIC spokesperson declined to comment since the programme is being run by the Health Ministry.