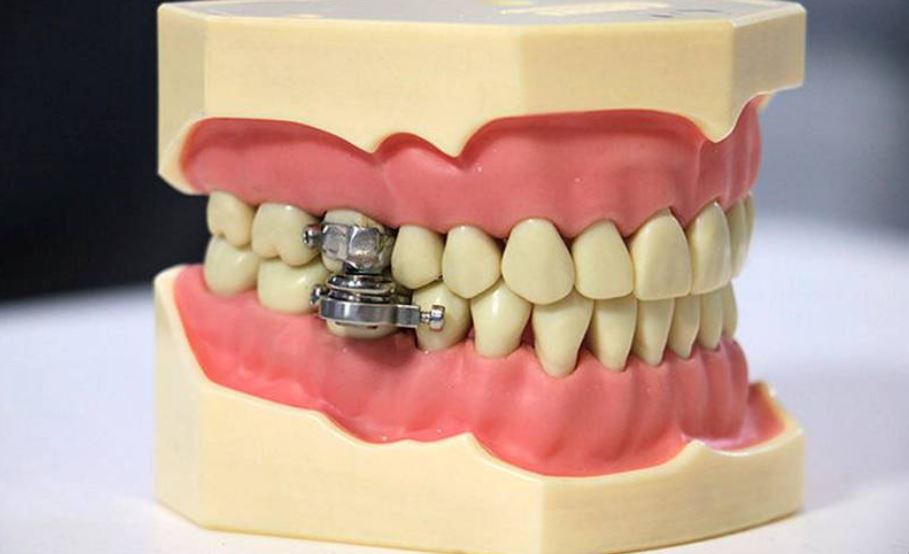 A new weight-loss invention has been deemed 'heinous' and been compared to medieval torture devices on social media. )Image credit: @otago, twitter)

A new device, designed by scientists from New Zealand and the UK, restricts wearers from opening their mouths wider than two millimetres, restricting them to a liquid diet.

The magnetic device is locked onto the jaw with locking bolts by a dentist, and apparently "allows free speech and does not restrict breathing".

"The main barrier for people for successful weight loss is compliance and this helps them establish new habits, allowing them to comply with a low-calorie diet for a period of time. It really kick-starts the process," Brunton said.

"It is a non-invasive, reversible, economical and attractive alternative to surgical procedures. The fact is, there are no adverse consequences with this device," he continues.

A few hours after it was advertised online, both scientists and netizens, took to social media platforms to slam the new contraption, often comparing it to torture devices from medieval times.

Some users compared it to 'jaw wiring', a controversial weight-loss mechanism used in the 1970s and 1980s which kept the jaw in place for a while to restrict overeating.

Many have also commented on the over-generalisation of obesity and its difficulties the device brings, and the stigma it supports.

The device has also been debunked by scientists as far from sustainable and efficient for long-term weight-loss.

Brilliant, I'd like to submit my idea for a device to help short people be taller. pic.twitter.com/5WYp26VbJ3

And this, kids, is why ethics needs to be taught in science.

Good God, I thought medicine was past these kinds of torture devices.

Making it impossible to eat doesn’t help fight obesity. What you’ve created is a device for the purpose of forced starvation - which is deadly in *any* body size. You can be dangerously malnourished & overweight. This is not a treatment for anything. This is a torture device.

“When we talk about weight loss, we’re not talking about something that prevents you from putting food in your mouth. We’re looking for changes in mindset, lifestyle, skills and strategies that people need to learn in order to change their relationship with food for life. I can’t for the life of me see how a tool like this is going to create the commitment needed for a sustained change,” Jade said.

In reply to the retaliation, the researchers at the University of Otago said: "The intention of the device is not intended as a quick or long-term weight-loss tool; rather it is aimed to assist people who need to undergo surgery and who cannot have the surgery until they have lost weight.

"After two or three weeks they can have the magnets disengaged and device removed. They could then have a period with a less restricted diet and then go back into treatment. This would allow for a phased approach to weight loss supported by advice from a dietician."

Nevertheless, they continue to get backlash from social media users, who pose concerns on the perils of not addressing the complexity of obesity and its psychological facets, as well as the still-prevalent culture of fat and body-shaming, arguing that a device like this only adds to the already rising issues.

This is promoting disordered eating and is a bad move. As a therapist I am telling you to not continue with this research.

I saw this on @1NewsNZ last night & I was disgusted & horrified. As someone who’s been obese, & knowing what I do about the research into how & why bodies become obese, this is needlessly torturous & shames ppl for their biology. Your ethics committee has a lot to answer for.