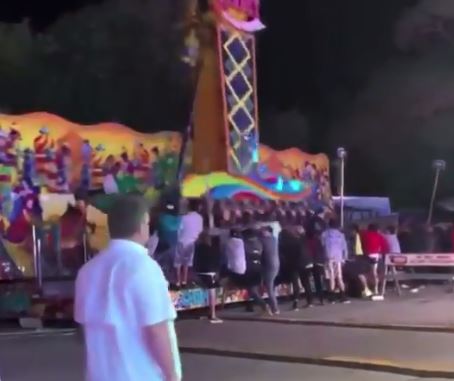 People holding down the Magic Carpet ride at Traverse City National Cherry Festival in Michigan after it is seen almost toppling over. (Image credit: @Phil_Lewis_, Twitter)

A terrifying video of a carnival ride going out of control at the National Cherry Festival in Michigan, US, was posted on social media on Thursday.

The video taken by a bystander shows people rushing to the Magic Carpet carnival ride to stop it from tipping over.

The ride suddenly started swaying forward and back, at which point about a dozen carnival goers rushed to the ride and put their weight on the front end to prevent it from falling over.

In the video, people on the ride can be heard screaming for help in a panic.

Fortunately, nobody was injured in the incident but were very shaken up after being released from the ride.