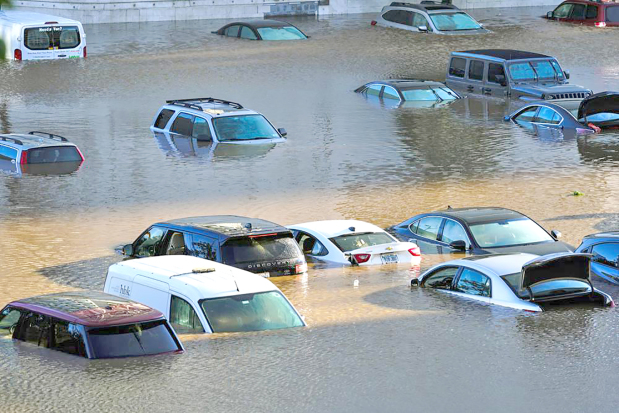 Vehicles are under water during flooding in Philadelphia yesterday, in the aftermath of downpours and high winds
NEW YORK: A stunned US East Coast faced a rising death toll, surging rivers, tornado damage and continuing calls for rescue yesterday after the remnants of Hurricane Ida walloped the region with record-breaking rain, drowning more than two dozen people in their homes and cars.
In a region that had been warned about potentially deadly flash flooding but hadn’t braced for such a blow from the no-longer-hurricane, the storm killed at least 26 people from Maryland to New York on Wednesday night and yesterday morning.
At least 12 people died in New York City, police said, one of them in a car and 11 in flooded basement apartments that often serve as relatively affordable homes in one of the nation’s most expensive housing markets. Officials said at least eight died in New Jersey and three in Pennsylvania’s suburban Montgomery County; one was killed by a falling tree, one drowned in a car and another in a home.
In New York City, Sophy Liu roused her son from bed, put on a life jacket on him and squeezed him into an inflatable swimming ring as their first-floor apartment flooded in Queens.
Unable to open the door against the force of the water, she called friends for help. The water was nearly five feet high when they came to her rescue, she said.
“I was obviously scared, but I had to be strong for my son. I had to calm him down,” she recalled yesterday as medical examiners removed three bodies from a home down the street.
In another part of Queens, water rapidly filled Deborah Torres’ first-floor apartment to her knees as her landlord frantically urged her neighbors below – who included a baby – to get out, she said. But the water rushed in so strongly that she surmised they weren’t able to open the door. The three residents died.
“I have no words,” she said. “How can something like this happen?”
Ida’s remnants maintained a soggy core, then merged with a more traditional storm front and dropped an onslaught of rain on the Interstate 95 corridor, meteorologists said. Similar weather has followed hurricanes before, but experts said it was slightly exacerbated by climate change – warmer air holds more rain – and urban settings, where expansive pavement prevents water from seeping into the ground.
The National Hurricane Centre had warned since Tuesday of the potential for “significant and life-threatening flash flooding” and moderate and major river flooding in the mid-Atlantic region and New England.
New York Governor Kathy Hochul and New York City Mayor Bill de Blasio said the storm’s strength took them by surprise.
The storm dumped over 23cm of rain in parts of New Jersey, Pennsylvania, Massachusetts and Rhode Island, and nearly as much on New York City’s Staten Island.
In Washington, President Joe Biden assured Northeast residents that federal first responders were on the ground to help clean up after the latest disaster in two weeks of wild weather across the US.