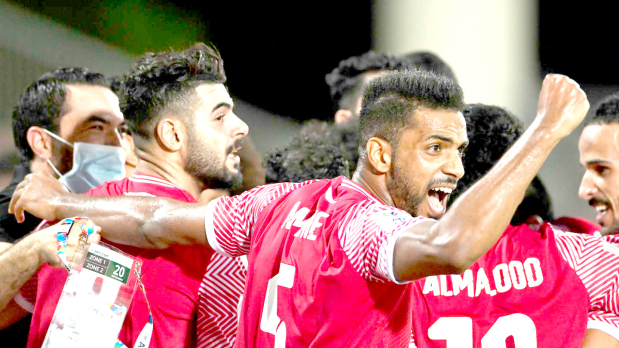 Muharraq eliminated reigning champions Al Ahed FC of Lebanon with an emphatic 3-0 victory in the West Zone Semi-final of the 2021 AFC Cup yesterday.

After a goalless first half, the 2008 champions came to life, bagging three goals in the second period to deny Al Ahed the chance of becoming the fourth side to successfully defend their AFC Cup title.

Five minutes into the game, hosts Muharraq came dangerously close to opening the scoring through Rashid Al Hooti, who attempted to volley in a beautifully weighted cross by Abdulwahab Al Malood from the byline, but a defender was in the right place and the ball was ultimately cleared.

Muharraq goalkeeper Sayed Jaafar was called into action close to the half-hour mark when Hilal Al Helwe’s deflected shot resulting from a free-kick situation saw Jaafar leap between his posts to get a touch to it.

At the other end, Al Malood forced Lebanese keeper Mostafa Matar into a similar reaction save, after he headed new signing Mahmoud Al Mardi’s corner towards the top corner but the keeper was more than alert.

The deadlock was eventually broken in the 67th minute by Muharraq, who broke forward at pace before Al Malood, close to the halfway line, played Moses Jona in ahead of high Al Ahed defence, with the number 55 pacing through before chipping the onrushing Matar who stood to watch the ball roll into the empty net.

Al Mardi missed two chances in quick succession to double his side’s lead and put the game to bed, but his shots were wide on both instances as Muharraq looked to secure the game following their opener.

It was Ahmed Al Sherooqi who finished the job for the Bahraini side just three minutes from time, when the lively Al Malood played him through on goal with the former just needing to place the ball past the keeper to make it 2-0.

Muharraq’s third goal came in the second minute of injury time, when two substitutes – Sanad Saleh and Abdulla Al Hayki – combined with the former feigning a dribble before passing to Al Hayki whose initial shot was saved, but the rebound was into an empty net.

Muharraq will face the winners of the other West Zone semi-final between Kuwait SC and Al Salt of Jordan today.