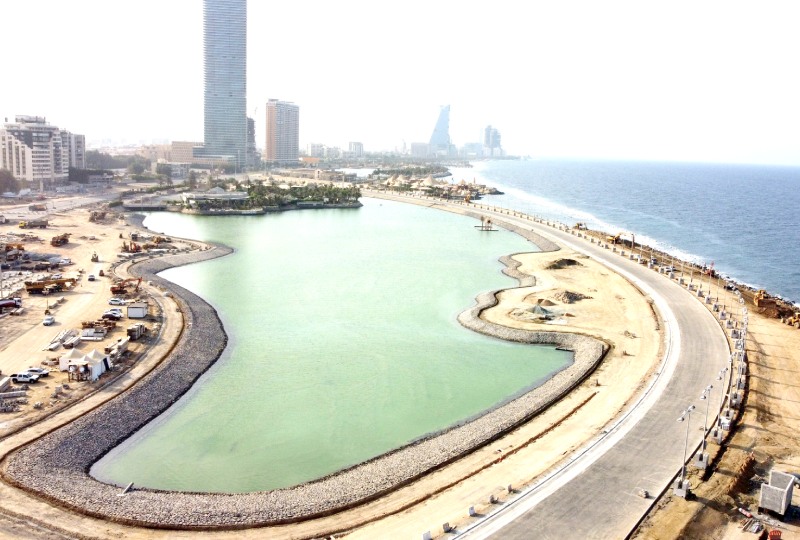 Jeddah: The Jeddah Corniche Circuit is set to become the world’s newest, fastest and longest street circuit when it makes its official Formula One debut from December 3 to 5.

The Saudi Automobile and Motorcycle Federation (SAMF), promoter of the Formula 1 STC Saudi Arabian Grand Prix 2021, yesterday outlined the steps it has taken to date, alongside its future plans, to ensure that the Jeddah Corniche Circuit becomes one of the most sustainable venues on the Formula 1 calendar.

In doing so, it echoes the ambitious sustainability strategy Formula 1 announced in 2019, which aims to ensure all F1 events are sustainable by 2025.

Over and above its spectacular racing potential, the 6.175km, 27-Turn Jeddah Corniche Circuit is also proving itself to be an entire sustainability project in its own right.

Before the construction of the circuit and its adjacent infrastructure could even begin, an extensive clean-up and regeneration of the whole lagoon - on which large parts of the track are situated - had to be instigated.

The lagoon regeneration project was divided in two stages. The first started in May 2021, covering a land reclamation area of 20,025 m2, while the second stage covering an area of 3,000 m2 was completed in late October.

The process included the removal of algae and waste and the subsequent installation of a system to purify and treat the water to prevent the future formation and accumulation of algae.

Furthermore, a staggering 162.814 tons of sludge and debris were dredged from the lagoon and divided into separate stocks, with the former treated and recycled while the latter was safely and responsibly disposed of.

The final stage of cleaning involved a process called bioremediation, which uses micro-organisms or other forms of life to reduce pollution through the biological degradation of pollutants into non-toxic substances.

Positioned right in the heart of Jeddah’s magnificent Waterfront, the Jeddah Corniche Circuit has been designed and built to serve the city of Jeddah well beyond the F1 race weekend. Indeed, it is a central element of the city’s grand Corniche renovation project.

The brand-new circuit’s infrastructure and design has been built specifically to develop an environmentally friendly space for the city that will add lasting value to the general public. To this end, the aforementioned lagoon regeneration has seen the establishment of a welcome place of respite along the city’s magnificent coastline for locals and tourists alike, in an area where once there as none.

Moreover, an extensive recreational area is being developed along the banks of the Red Sea, extending the popular Corniche walkway even further and populating it with a series of outdoor recreational opportunities for children and adults including new walkways and cycling paths, children’s playgrounds as well as the establishment of family friendly restaurants, public restrooms, increased parking spaces and much more.

In all elements of this regeneration project, the primary goal is to preserve and enhance the surrounding soil conditions and the local environment to ensure that via the use of sustainable earthworks and landscaping methods, a flourishing and biodiverse vegetation is sustained alongside the extensive redevelopment in the area.

Meanwhile, Formula One’s governing body has said it is confident Saudi Arabia will be ready for its grand prix debut next month.

Depending on results in Brazil and Qatar, Saudi Arabia could be a title decider between Red Bull’s Max Verstappen and Mercedes’ Lewis Hamilton. Verstappen leads Hamilton by 19 points with four races remaining.

“The FIA and F1 are getting daily updates of where things are at and it’s progressing very, very quickly,” FIA race director Michael Masi told reporters after last weekend’s Mexico City Grand Prix.

“I think everyone will acknowledge there’s a lot to do but still confident of the race going ahead, no problems.”

The Australian said he had visited Jeddah a few weeks ago and his past experience of new races in South Korea (in 2010) and India (2011), both now off the calendar, gave him confidence.

“Both of those went off, no problems at all, and I’m quite confident that Saudi will be exactly the same,” he said.