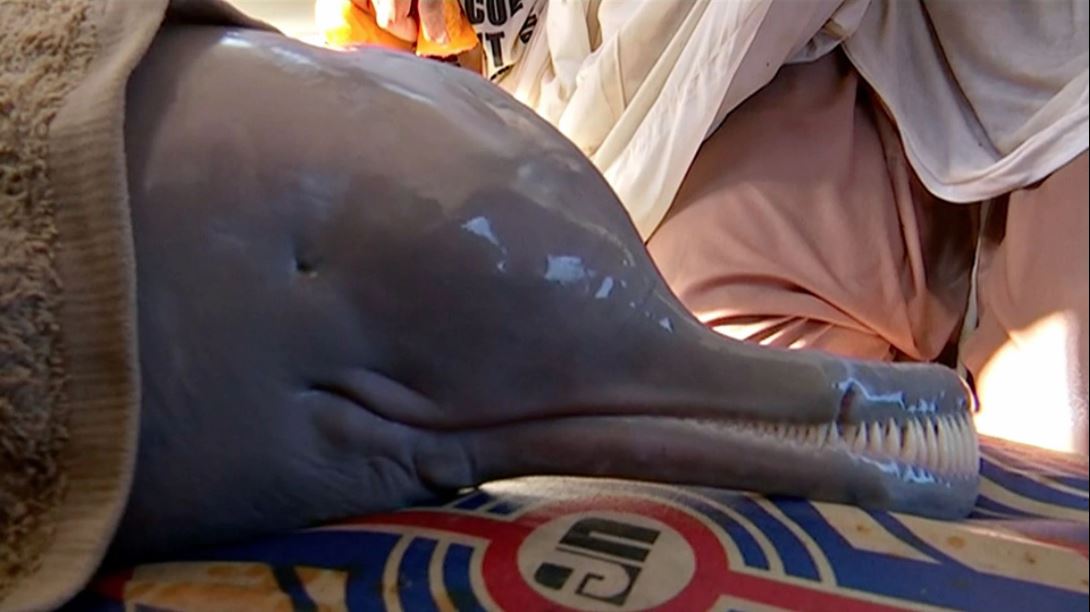 An Indus dolphin is seen inside an ambulance. Larkana, Pakistan October 30, 2021. Reuters Photo

LARKANA, Pakistan: An endangered grey dolphin twitches its flippers weakly as it lies in a truck speeding towards a sanctuary in Pakistan, while rescuers sprinkle water on the animal to keep its skin moist and save it from dying.

Blind, with a snout equipped with two rows of sharp teeth, the Indus river dolphin strayed from its freshwater home into a busy waterway, and had to be lifted out by rescue staff in the south eastern province of Sindh after they trapped it in nets.

Now they must keep it alive as they race to the sanctuary 82 km (51 miles) away where they can free it.

"We have to try and get it to the river as soon as possible," said Mir Akhtar Hussain Talpur, an official of the provincial wildlife department, which has rescued 10 of the animals this year, eight of them in just the last month.

"When we are taking a rescued dolphin to the river, we have to be very careful," he said.

It was a delicate task to keep the skin wet and foster the animal's impression of being still in the water, while ensuring no fluid entered the blowhole by which it breathes, he added.

The dolphins are being squeezed out of their habitat after human activity, from dams for irrigation projects to pollution, penned them into a 1,200-km (750-mile) stretch of Pakistan's Indus river, or just half their original range.

Living for millions of years in the turbid waters, the mammals, just one of four surviving freshwater species, eventually went blind and use echolocation, or a form of sonar, for navigation.

They can grow to a length of more than two metres (2 yards) and exceed 100 kg (220 lb) in weight, feeding on catfish, carp and prawns, but need waters at least a metre deep to keep alive.

Some smaller animals stray into shallow irrigation canals, ponds and even fields, where they cannot survive. Although hunting them is banned, Sindh wildlife officials say that getting entangled in fishing nets remains a key threat.

But protection efforts have paid off, with numbers rebounding to 1,816 in 2019, up by half from 2001, a WWF survey showed. That was a far cry from the figure of 132 in 1972 that brought endangered status, leading to creation of the sanctuary.

About 30 animals have died in the roughly 200 rescue efforts Pakistan has launched since 1992. But all 27 rescues after 2019 have succeeded.