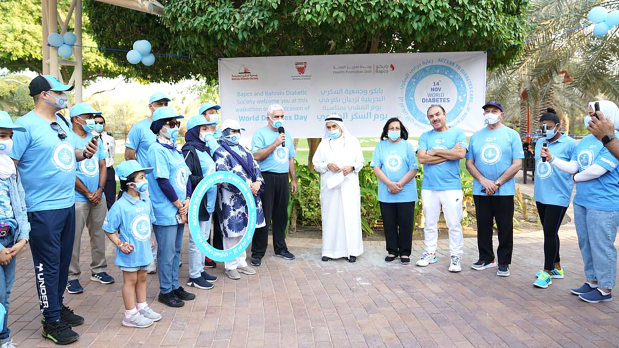 World Diabetes Day is an opportunity to raise awareness about a healthier lifestyle to combat the increasing numbers of cases in Bahrain and around the world, experts have said.

The kingdom today joins other nations in observing the day, marked annually on November 14.

This year’s theme is “Access to Diabetes Care: If not now, When?” and a ceremony was held yesterday at Princess Sabeeka Bint Ibrahim Al Khalifa Park in Awali, co-organised by the Health Ministry, Bahrain Diabetes Society, Bapco and the Southern Governorate.

Addressing the ceremony, Dr Shaikh Mohammed stressed Bahrain’s keenness to tackle the disease which represents one of the public health challenges that affect people and societies and takes a heavy toll on the health sector and development efforts.

“Over the past years, the prevalence of diabetes has doubled worldwide, with more than 537 million people currently living with the disease, and most of these cases are type 2, which can be prevented through physical activity and a healthy balanced diet,” he said.

A World Diabetes Day conference was organised by the Primary Healthcare at the Supreme Council for Health, in co-operation with Novo Nordisk.

Speaking at the event, Primary Healthcare board of trustees chairman Dr Abdulwahab Mohammed said Bahrain is one of the leading countries to develop plans and programmes to combat diabetes, included in the health sector’s national plan for 2016-2025.

Bourn Anderson, representative of the Denmark Embassy, and Dr Ahmed Majdy, head of patient support and public relations department at Novo Nordisk, were other keynote speakers at the forum, attended by doctors, specialists and academics through in-person attendance or via video call.

Dr Mohammed praised the focus on this year’s theme and its importance in the pharmaceutical sector and in treating the disease.

He said the increasing number of diabetes cases, according to the latest national health survey conducted in Bahrain in 2018-2019, requires intensified efforts to raise awareness.

He added that the adoption of a healthier lifestyle through regular exercising and healthy eating should be encouraged among parents and children at an early age, especially with the increasing rates of cases among children, where an average of 80 to 85 cases of type 1 diabetes are recorded in young people annually.

Primary Healthcare Centres CEO Dr Jalila Al Sayed said the fight against diabetes in Bahrain has acquired a new challenge represented by the coronavirus pandemic. Controlling the number of Covid-19 cases can lead to reduced risks for diabetes patients, she said.

Diabetes causes the reduction of the body’s immune system efficiency, and therefore reducing the number of cases can reduce those challenges, Dr Al Sayed added.

Dr Majdy highlighted the 100th anniversary of the invention of insulin, which made a therapeutic breakthrough that saved many lives, especially children with type 1 diabetes.