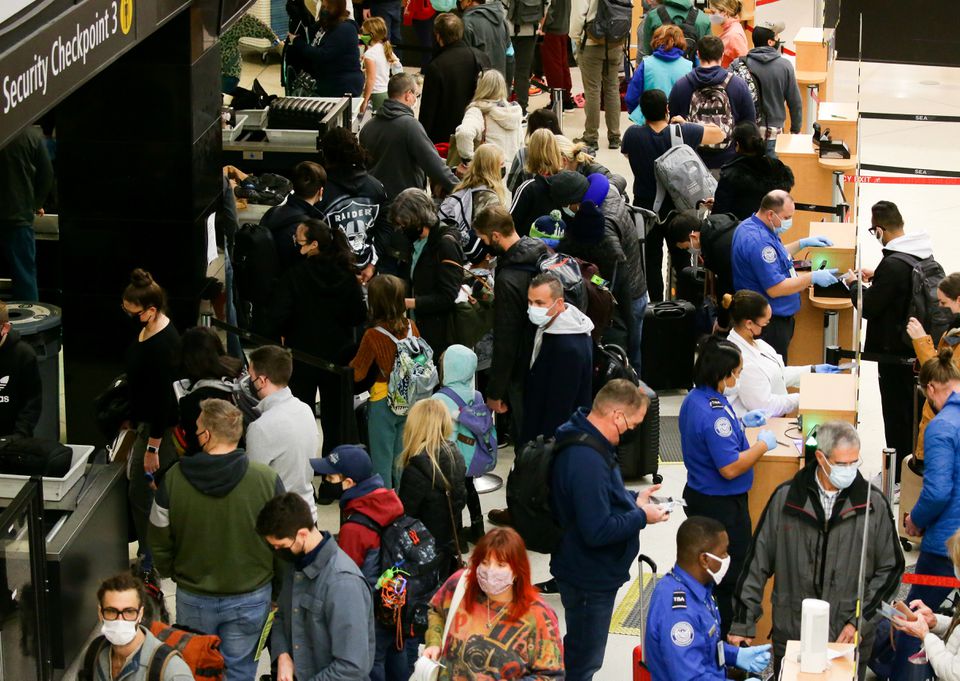 Travellers wait to process through a security checkpoint at Seattle-Tacoma International Airport before the Thanksgiving holiday in Seattle, Washington, U.S. November 24, 2021. REUTERS/Lindsey Wasson

President Joe Biden urged Americans on Monday not to panic about the new Covid-19 Omicron variant and said the United States was making contingency plans with pharmaceutical companies if new vaccines are needed.

Biden said the country would not go back to lockdowns to stop the spread of Omicron, and he would lay out his strategy on Thursday for combating the pandemic over the winter. He urged people to get vaccinated, get boosters and wear masks.

"This variant is a cause for concern, not a cause for panic," Biden said in remarks at the White House following a meeting with his Covid-19 team.
"We're going to fight and beat this new variant," he said.

Omicron has prompted countries across the globe including the United States to limit travel from southern Africa, where the virus was first detected. The World Health Organisation said on Monday that it carries a very high risk of infection surges, but said no deaths had yet been linked to the new variant.

Biden said it was inevitable that Omicron cases would emerge in the United States. But White House spokesperson Jen Psaki said the variant should not cause Americans to change their holiday travel plans as long as they are vaccinated and wear masks.

Biden said he believed that existing vaccines would continue to protect against severe disease, but added that his administration was working with vaccine makers Pfizer, Moderna and Johnson & Johnson to develop contingency plans.

"In the event, hopefully unlikely, that updated vaccinations or boosters are needed to respond to this new variant, we will accelerate their development and deployment with every available tool," he said.

Biden said he would direct the U.S. Food and Drug Administration and the Centers for Disease Control and Prevention (CDC) to make those vaccines available quickly.

Separately, the CDC said all vaccinated Americans aged 18 years and older should get a booster shot - a stronger recommendation than the one it issued last week, when the agency expanded booster eligibility to all adults but stopped short of saying that everybody should get them. read more

A US travel ban took effect earlier on Monday blocking most visitors from eight southern African nations from entering the country. Earlier flights from South Africa to the United States did not screen passengers after the variant was found. read more

The White House is not curbing Biden's travel plans or canceling its holiday parties, Psaki said.

Biden said the travel restrictions were put in place to give the country time to get more people vaccinated.

Vaccine hesitancy in the United States and around the world has thwarted public health officials' efforts to get the pandemic under control. Only a quarter of the population in South Africa is fully vaccinated, while many western European nations have vaccinated more than two-thirds of their residents.

Just 59% of all Americans are fully vaccinated, although almost 70% now have had at least one shot.
Nearly 782,000 people have died from Covid-19 in the United States, according to a Reuters tally.

US government workers were required to get vaccinated by Nov. 22, but the White House told federal agencies on Monday that they can delay punishing those who did not comply.

Much of the United States shut down in early 2020 at the beginning of the pandemic, but economic activity and jobs have bounced back in recent months. Face masks and vaccine mandates are opposed by some Republican politicians, even as health experts tout their effectiveness.