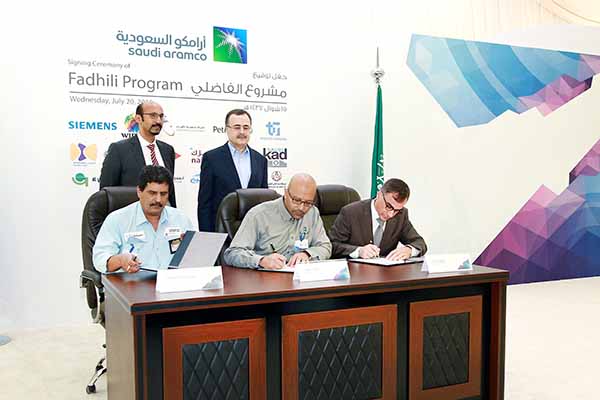 The project is worth more than 50 billion riyals ($13.3bn) and, when completed in 2019, will be the first programme in the kingdom to treat gas from both onshore and offshore fields.

The company signed a contract with Saudi Electricity Company and France’s Engie to construct the Fadhili plant, which will produce power and steam. A contract for work on offshore facilities went to India’s Larsen & Toubro .

Two other contracts, awarded to local companies, are for downstream facilities and a residential camp.

Other contracts for the project were signed late last year.

Many industrial firms have complained about a gas shortage crimping expansion plans. The kingdom is also trying to use more gas for power generation and water desalination instead of burning crude oil, which it wants to export.

“Using low British thermal unit gas, where technically viable, as a substitute for conventional gas (methane) will extend the availability of gas supplies within the kingdom during periods of peak gas demand,” Sadad Al Husseini, a former senior executive at Aramco, said of the project.

The plan for Fadhili includes a 1,500 megawatt power plant, which will use 400 MW of electricity to power the gas project and send the remaining 1,100 MW to the domestic grid.

Engie has signed an agreement which will ensure the power produced by the plant will be bought for 20 years.