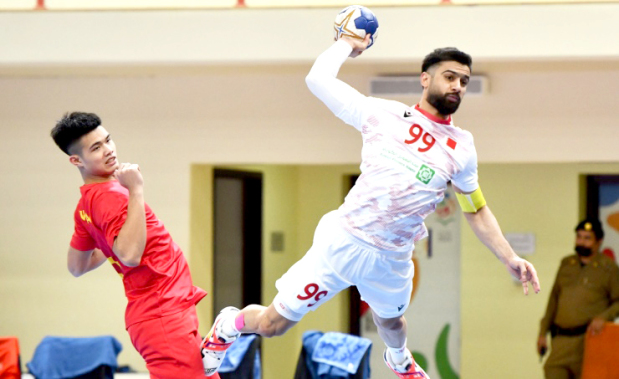 Action from Bahrain’s game against Vietnam
Bahrain yesterday made a strong start in the 20th Asian Men’s Handball Championship, being held in Dammam, Saudi Arabia.
The national squad eased past Vietnam 46-31 in their first group match in the Asian competition, which is a qualifier for the 2023 IHF World Men’s Handball Championship to be held in Poland and Sweden.
Led by Icelandic coach Aron Kristjansson, the national team outclassed Vietnam, leading 28-5 at halftime.
Bahrain and Vietnam featured in Group B, along with Uzbekistan and Hong Kong. The Uzbeks defeated Hong Kong in their opening clash.
Bahrain will take on Uzbekistan today at 4pm at the Sports Ministry’s arena in Dammam, hoping to claim their second straight victory and book a berth in the next round.