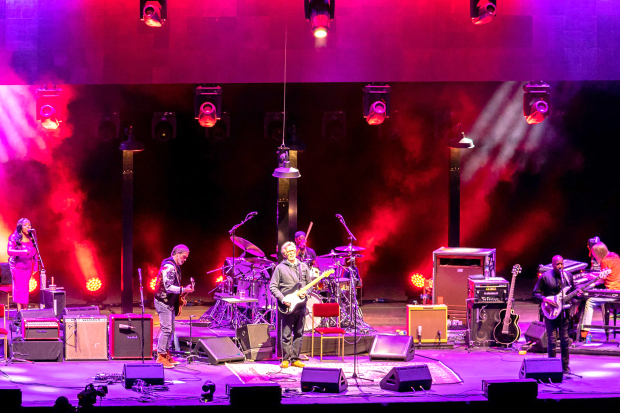 Clapton, who turns 77 on March 30, had just walked off stage with his band after performing a thirteen-song set non-stop. Aware that they would probably never have the chance to witness him play live in Bahrain again, the crowd didn’t stop their chants imploring him to play just one more song.

In the preceding hour-and-a-half, Clapton had enthralled them with impeccable renditions of some of his most famous songs from the 1970s, ‘80s and ‘90s.

Starting off with Don’t keep pretending, Key to the Highway and Old Love, Clapton sent the audience into raptures with his famous cover of the Bob Marley classic I Shot the Sheriff.

Later, he moved most to tears when he sang Tears in Heaven.

“He wrote this song for his young son who died in an accident in the early 1990s,” a woman whispered to her friend, as most of the crowd switched their phone lights on and waved them in tribute.

Then, after performing hits Layla and Badge, Clapton launched into his most famous love ballad Wonderful Tonight as couples in the crowd stood, clasped hands and swayed to the romantic classic.

Soon, he switched gears, making the audience clap to the upbeat tempo of Crossroads before making them sing along to the cult classic Cocaine.

Now, it was time for the encore. The crowd hadn’t stopped shouting for him to return to the stage but the lights remained dimmed and it appeared that he really had ended the concert.

Suddenly, there was movement on stage, the lights turned brighter and the audience roared its approval as Clapton and his band reappeared with Jools Holland making a surprise guest appearance.

“We’re going to perform one more song,” he announced, to endless cheering and clapping, and launched into the popular Sunshine of Your Love.

Then, it was time for the final goodbye, this time for real and a standing ovation ensued as the musician and his colleagues took their bows.

This is the second time he has performed here. The first time was in 2014 to rave reviews.

The 2022 encore was a dream come true for this dedicated Clapton fan. A big hand for the Slow Hand.