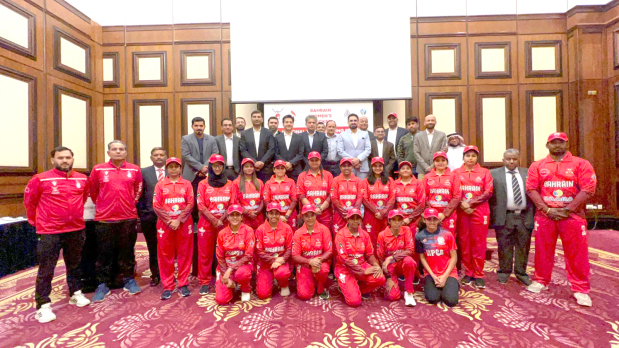 Winning a top International Cricket Council (ICC) regional award for women’s cricket is a great honour for Bahrain and will provide a further boost to the game in the kingdom, the Bahrain Cricket Federation (BCF) chief said on Thursday.

Bahrain has been given the ICC’s Female Cricket Initiative of the Year Award for the Middle East for ‘Building a robust community of women cricketers’, a recognition of the rapid pace at which women’s cricket is being developed and promoted in the island nation. The award acknowledges an outstanding female cricket-focused initiative delivered by an ICC Associate Member to promote the game, either through a physical participation programme or a digitally delivered game development initiative during the year.

“Without a doubt, this is a wonderful, great honour,” BCF president Hatim Dadabai told GDN. “Just imagine: all this has happened in just three months since the women’s league was formed in December and our national women’s team just played in their first ever T20I tournament in March.”

Formerly known as the Bahrain Cricket Association, the BCF was rebranded and reconstituted in mid-2021. It has, since, under Dadabai’s leadership, embarked on a structured, nuanced plan to develop the game from the grassroots by introducing school competitions, setting up different age-level, and other, tournaments for both men and women and launching a drive to increase the participation of more locals in the sport.

The women’s league received a strong response with over 200 women registering for the club-based competition and led to stand-out performers being selected for the first Bahraini women’s team to play an international ICC-sanctioned tournament in March.

The team created history in their opening match, against hosts Oman, of the six-nation GCC Women’s T20I Championship Cup, by becoming the first women’s team from Bahrain to play in a T20 international. And, a game later, the team etched their names in the record books by setting a new world record for the highest team total in women’s T20Is by scoring 318 for one against Saudi Arabia with former Sri Lankan international Deepika Rasangika smashing the highest individual score as she finished with 161 not out.

“This is just the beginning,” Dadabai asserted. “We want to make sure we’re competing with the best on the world stage. All credit to the women’s team: they’ve shown that they have the talent and the ability to take on any comers. We’ve always known that there are a lot of talented women cricketers in the country and now, they’re being given a chance to showcase their skills.”

Women’s team manager Shaila Khan agreed with Dadabai, saying all the hard work put in by the team had paid off in their first ever international tournament.

“One of BCF’s aims is to empower women through cricket and that is being achieved,” she added. “Our goal is now to become the number one team in the GCC and, then, try to be the best in the world. We are grateful to the BCF board members and all the players, coaches and clubs because, without their support, none of this would be possible.”

Captain Tharanga Gajanayake, who, along with Rasangika, was a star performer in Oman, said she was delighted to hear about the award.

“We hope to have more such achievements,” she said. “It is an absolute honour to captain this gifted side. The women’s league has helped us in getting the best players from across Bahrain.”

Coach Prabodha Arthavidu said he was glad to have been able to contribute to the team’s success and absolutely over the moon to learn about the ICC award.

“I’m happy to have been able to contribute to this amazing journey,” he said. “Credit to all the teams in the women’s league, the players and coaches whose collective efforts have resulted in the ‘Pearl of the Gulf’ now occupying a prominent place on the international cricket map.”